After World War I, there was a change in attitude concerning pistol competition in the United States.

Unhappy with your stock 1911's trigger pull? The DTS from Nighthawk is the next best thing to a custom trigger job, and a whole lot cheaper.

Announced back in November 2018, Accuracy X has built a one-of-a-kind 1911 pistol for a raffle to raise funds to help the U.S. F-Class Rifle Team compete at the 2021 World Championships in Bloemfontein, South Africa. Finally, the custom 1911 has been unveiled, and it’s a beauty. 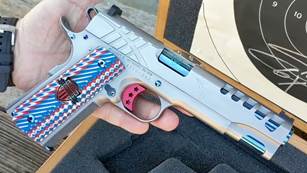 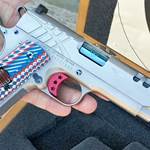 Why worry about a little barrel fouling when the throat is subjected to a brutal 5600° F volcano at 55,000 PSI?

Gabriela (Gabby) Franco exudes energy and confidence as she travels the country teaching firearms courses and competing in USPSA matches. A former pistol competitor on the Venezuelan Olympic team, she moved to the U.S. in 2002 after claiming three gold medals in the South American Games. Many know her from Season 4 of History Channel’s “Top Shot” series.