SFC Keith Sanderson of the U.S. Army Reserve is this year’s NRA National Pistol Champion, with a score of 2655-122X. The two-time U.S. Olympic team member won by 14 points in a classic muddy Camp Perry match for the record books. SFC Sanderson is no stranger to the winners podium, racking up the wins with the USMC for eight years, before joining the Army Reserve. Not only did SFC Sanderson literally write the book on pistol marksmanship fundamentals, he won an unprecedented three medals (gold, silver, and bronze) at three World Cups in 2009.

NRA President Allan Cors has asked the competitive committees to come up with new games, using new firearms, and/or any combination thereof that will get more people out and shooting. The goal is to benefit all competitors in all disciplines. If you have any ideas, please send them to me for presentation to the committees.

For slow fire at the National Matches in the early 20th century, the Colt Camp Perry pistol, with a unique design and National Match-specific features, is one really nice gun to shoot 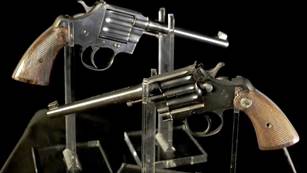 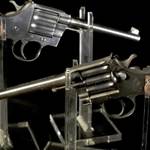 If you are an experienced high power rifle shooter then the joys of pit duty are nothing new to you. However if you are new to the sport, here's our primer on how your time will be spent on the other end of the berm 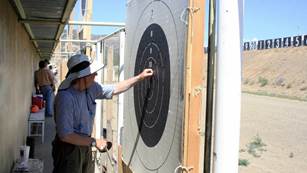 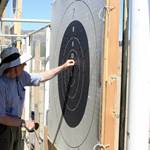 So many of us look back on our adolescent summers with fondness, or even as the best years of my life. Some spent their summers on a baseball diamond, helping with the family farm, working in the local ice cream shop, or helping at summer camp. And a lucky few found themselves returning to the shores of Lake Erie to work for the NRA Range Operations at Camp Perry, like me for example.

John Grubar's life have been far from boring. A Lieutenant in the U.S. Naval Reserve and Korean War Veteran, he quit his physical education teacher job at the University of Maryland sixty years ago to begin an illustrious career with the National Rifle Association of America.

Anticipation . . . Everybody Does It

Yes, everybody. In some form or another, practically every bad shot that was not a grip or position issue was a form of anticipation. Jerking the trigger is in essence anticipation, bucking, heeling and flinching. All of these are forms of anticipation.

Will Murray drove 15 hours non-stop to the National Matches this year.