Team Walther’s Gabby Franco says “the PDP F-Series is the result of a revolutionary approach to creating a pistol with female shooters in mind.”

Equity In The Shooting Sports

With over 15,000 NRA-affiliated organizations in the U.S., plus other target shooting entities, there is ample opportunity to enjoy the shooting sports at all levels. 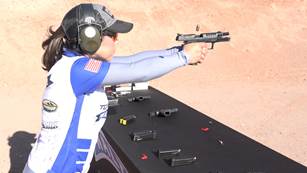 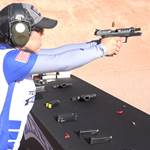 The Venezuelan Olympian turned practical shooting superstar will not only compete for Walther, but will also be a company brand ambassador

Here’s 8 of the top YouTube channels dedicated to competitive shooting, including the NRApubs channel, Julie Golob, the Miculeks and more!

Just a few of the many opportunities to mingle with pro shooters at this year’s NRA Annual Meeting and Exhibits.

If you watch cable television, you may recall seeing Gabby make it to the individual stage during Season 4 of the History Channel’s TOP SHOT Series.

Gabriela (Gabby) Franco exudes energy and confidence as she travels the country teaching firearms courses and competing in USPSA matches. A former pistol competitor on the Venezuelan Olympic team, she moved to the U.S. in 2002 after claiming three gold medals in the South American Games. Many know her from Season 4 of History Channel’s “Top Shot” series.