NRA Tactical Police Competition (TPC) reflects real-life engagements that law enforcement officers face every day. Through TPC matches, officers gain valuable practice time with their duty firearms and equipment, and through performance evaluation are better prepared to deal with threatening situations to protect the lives of the citizens in their communities. TPC consists of scenario- and skill-based courses of fire and is different in many ways from other tactical competitions. 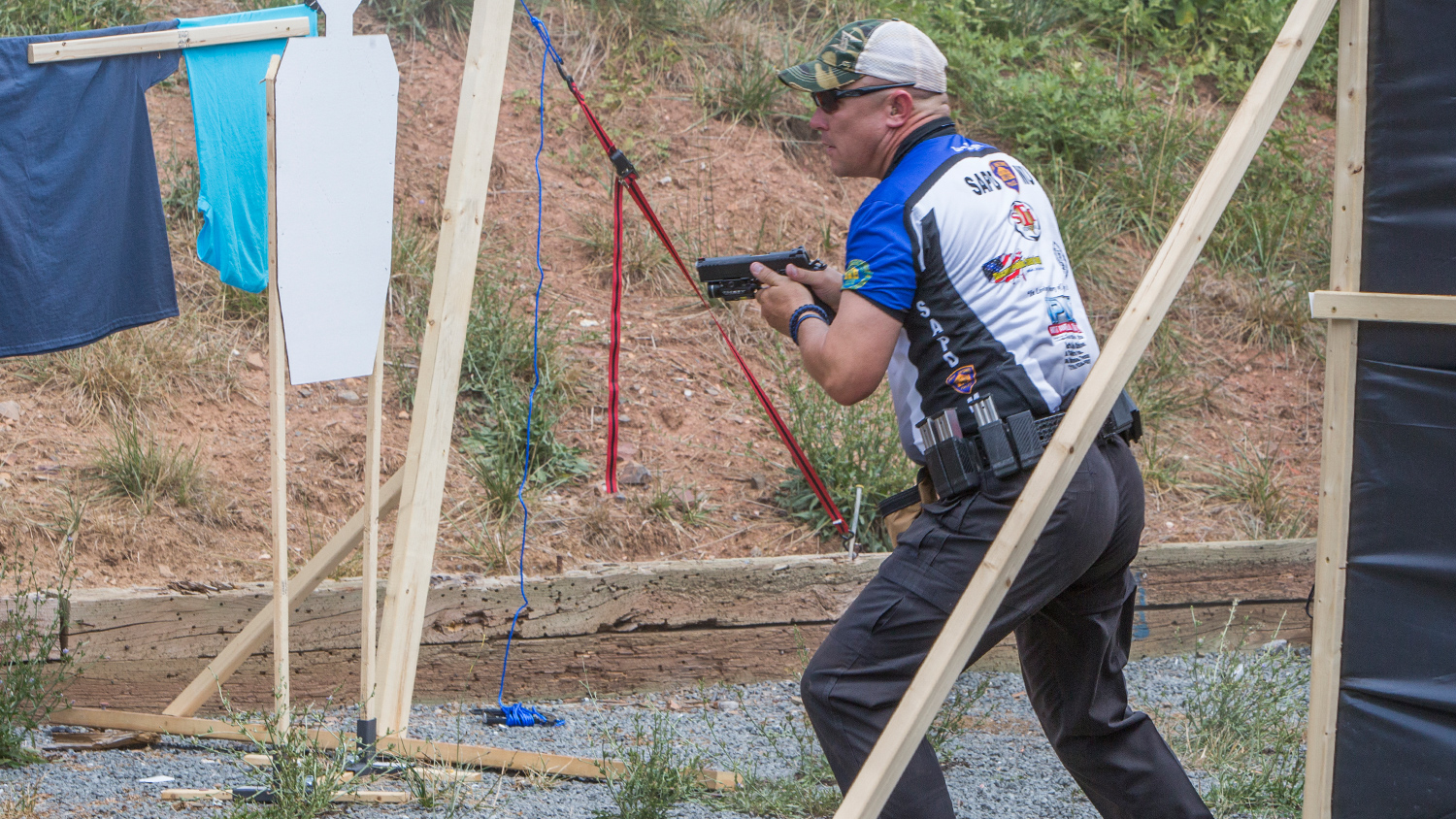 Consisting of skills-based and scenario-based courses, TPC is similar to 3-Gun in that competitors are running and gunning in complex stages scored via scoring hits and timing.
TPC Competition
TPC competitors must use duty firearms—the same rifles, pistols and shotguns they use every day while on duty. Race guns with competitive accessories or mods are not allowed. The sport is divided into two divisions, patrol and tactical. In the patrol division all shooting is done with iron sights, and the shotgun must be a pump-action. For tactical, the handgun and shotgun must have iron sights, but the rifle can have a single optic—such as a telescopic, red dot, or holographic sight. Additionally, the tactical division allows for competitors to use either a pump-action or semi-automatic shotgun.

Marc Lipp, manager of NRA law enforcement competitions has been in charge of the program since its inception. “TPC matches mirror what we teach on the training side. We have officers face the same challenges they would on the street every day at work. What an officer carries on the street should be what he or she uses for many TPC courses.” Lipp added, “For example, if your department issues pistol-caliber carbines, you can use them in the rifle portion of NRA TPC courses.”

The Fairfax TPC competition I attended in Chantilly, VA, had six courses, three each for scenario and skills. The match was hosted by the Fairfax County Police Department in conjunction with the NRA. Competitors I talked to at the match gave high praise to the format and course of fire. 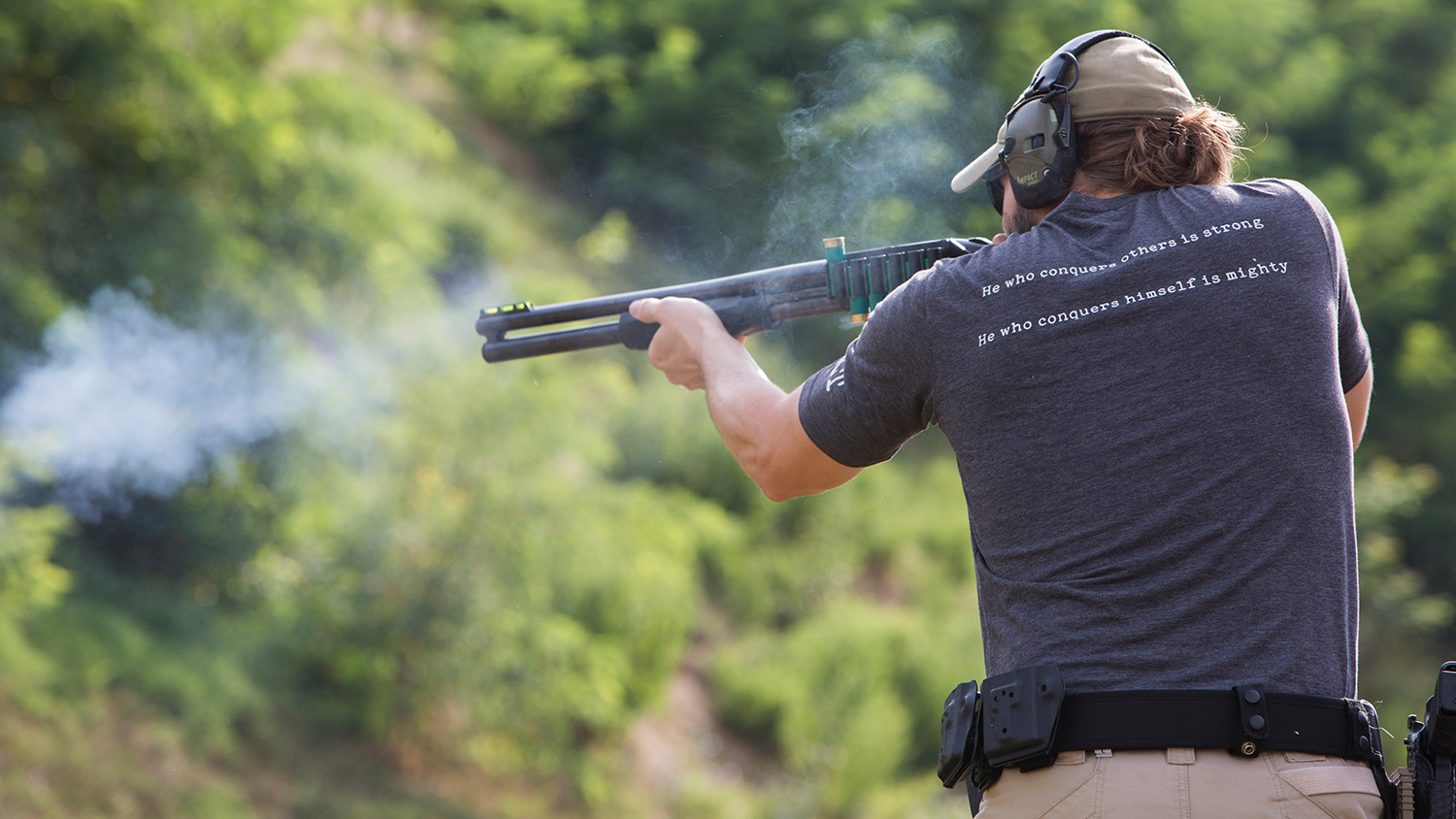 TPC courses are designed to be used out of the box by firearms instructors for training.
Master Police Officer Rob Sloan of the Fairfax County Police Department (FCPD) Shooting Team has been a TPC competitor for eight years. Rob was one of the original range officers to help conduct TPC events when the program started. He told me, “Any time I get the opportunity to, I like to compete in TPC—I try to make it to every match held. I can get the best training with this type of competition.”

In addition to TPC, Rob competes in NRA Police Pistol Combat (PPC) matches, as well as 3-Gun. He added, “FCPD has been very supportive of the shooting team, which is growing rapidly. We started with two shooters, and hope to add our eighth member after this match.”

Courses of Fire
Consisting of skills-based and scenario-based courses, TPC is similar to 3-Gun in that competitors are running and gunning in complex stages scored via scoring targets and timing. The similarities end there, because of the NRA law enforcement division’s philosophy of making competition mirror street realities. Sometimes there are even blind courses, meaning there is no walkthrough of the stage.

TPC courses are designed to be used out of the box by firearms instructors for training. For example, target scoring is based on anatomy, so to be scored as a hit—the bullet hole must be completely inside the scoring ring. This is because a round that strikes the edge of a vital organ would have little effect in real life. In TPC, if a round partially breaks a scoring ring, it’s always scored with the lesser value. Rounds that only break the edge of a target or scoring area are counted as a miss. 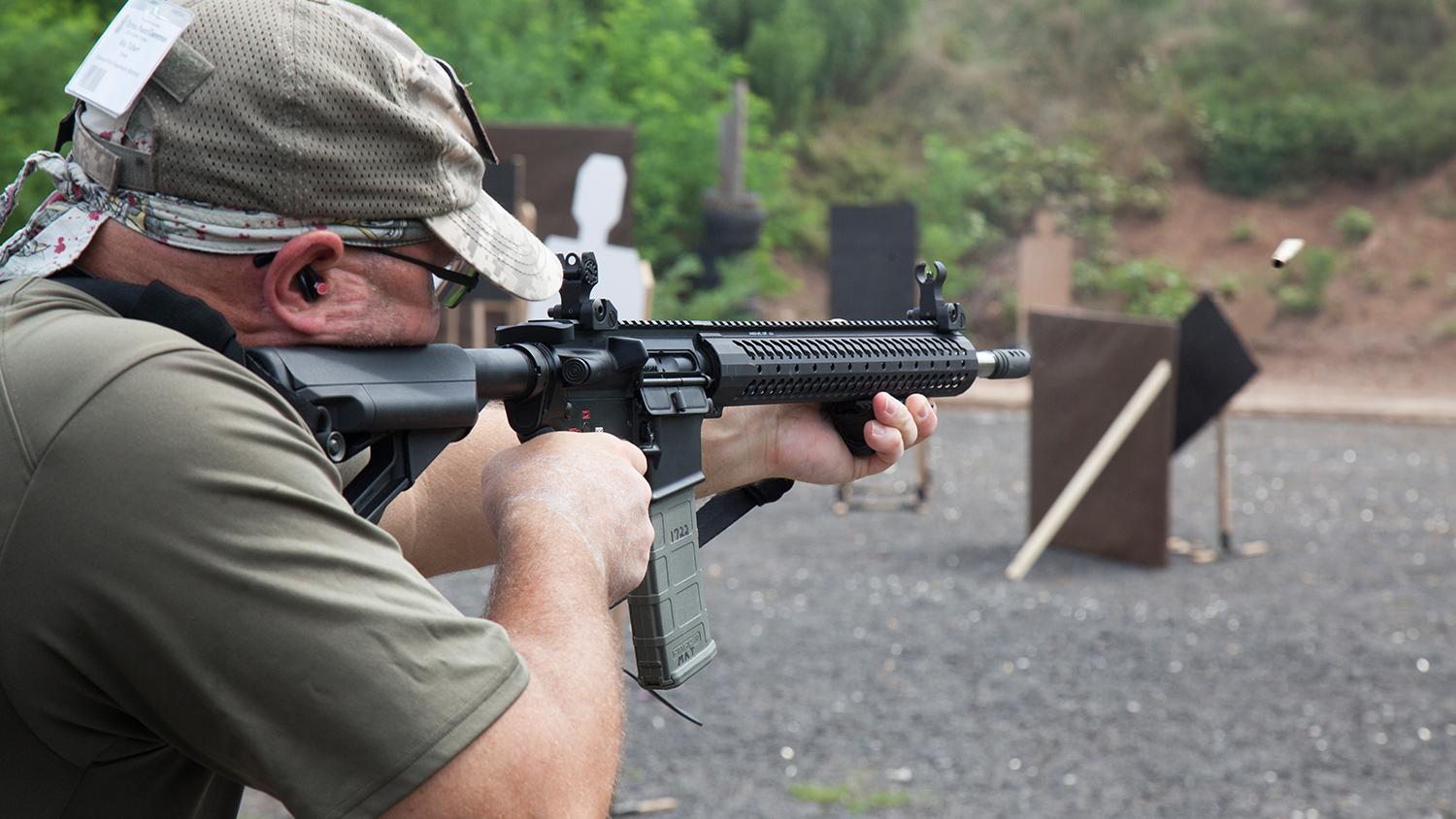 Through TPC matches, officers gain valuable practice with their duty firearms and equipment.
Scores are updated via tablet using an NRA-developed application. The scores are calculated from the time it takes for a competitor to shoot the course, loss of accuracy penalties, and procedural penalties. Shooters can lose major points for hitting targets that represent innocents (non-threats)—which are represented by targets showing the back white side.

Scenario Course Example—You never thought it would happen here
Since NRA tries to mimic real-life situations in TPC competition, the courses can be complex. Scenario-based courses place officers in an imaginary law enforcement encounter. The officer must decide how to approach the course and solve the challenges presented using their own tactics and skills. 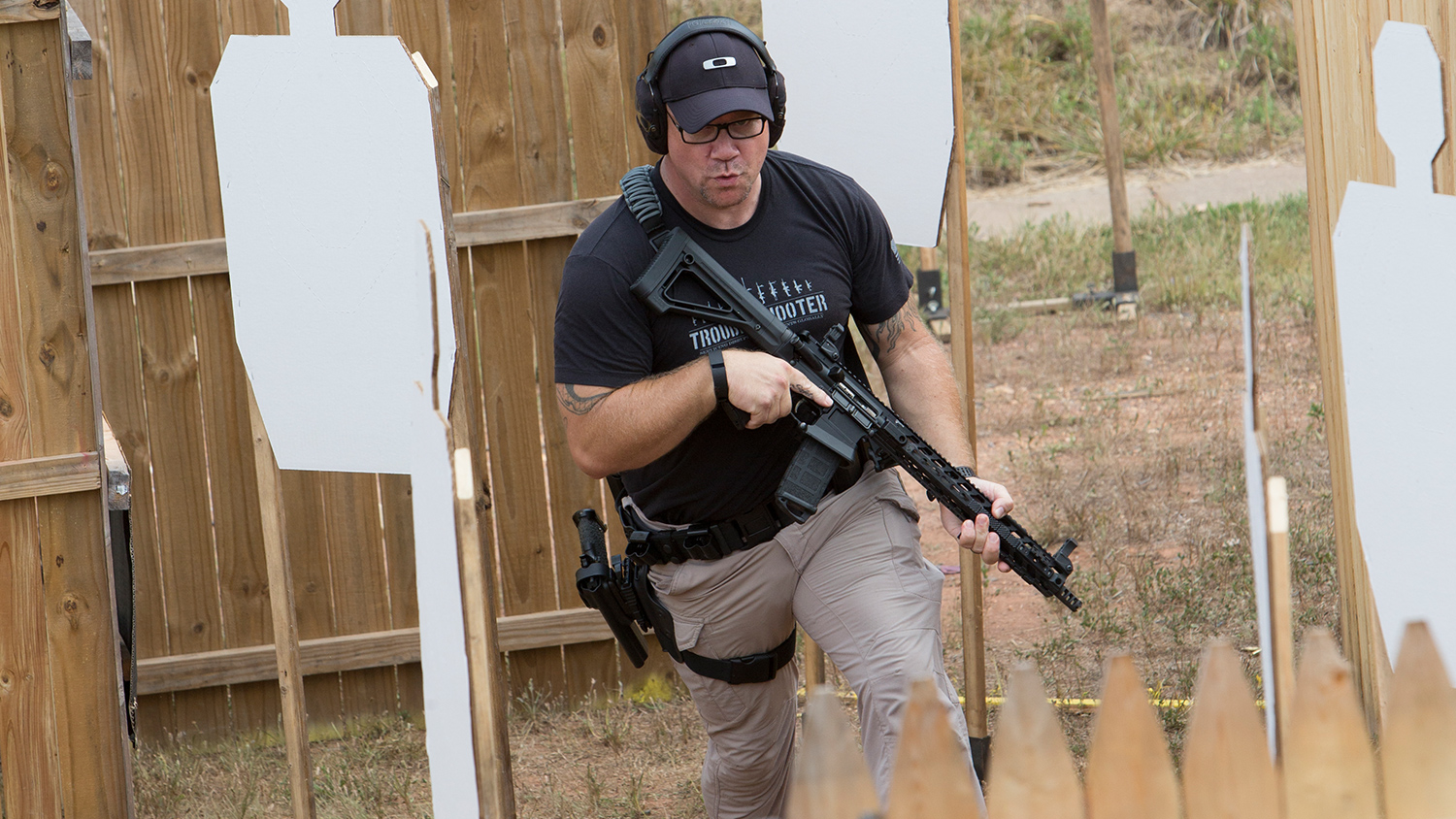 NRA tries to mimic real-life situations in TPC competition.
In the You never thought it would happen here course at the Fairfax TPC competition, officers explore a local café at a simulated town center with their duty handgun and patrol rifle. The town center is filled with non-threats intermingled among the threat targets, just as it would be during an actual threat situation. Shooters search the café with their rifles, looking for threat targets. After running out of rifle ammo, the competitors switch to their duty handgun for any remaining targets.

Skills Course Example—Run it three times
Skills-based courses in TPC offer the chance for an excellent extension of training— encouraging officers to hone their skills and gain more experience with their duty handguns, shotguns, and patrol rifles in competition. The courses challenge the officer’s skills and abilities in handling, accuracy and overall proficiency with a given firearm system under set conditions. 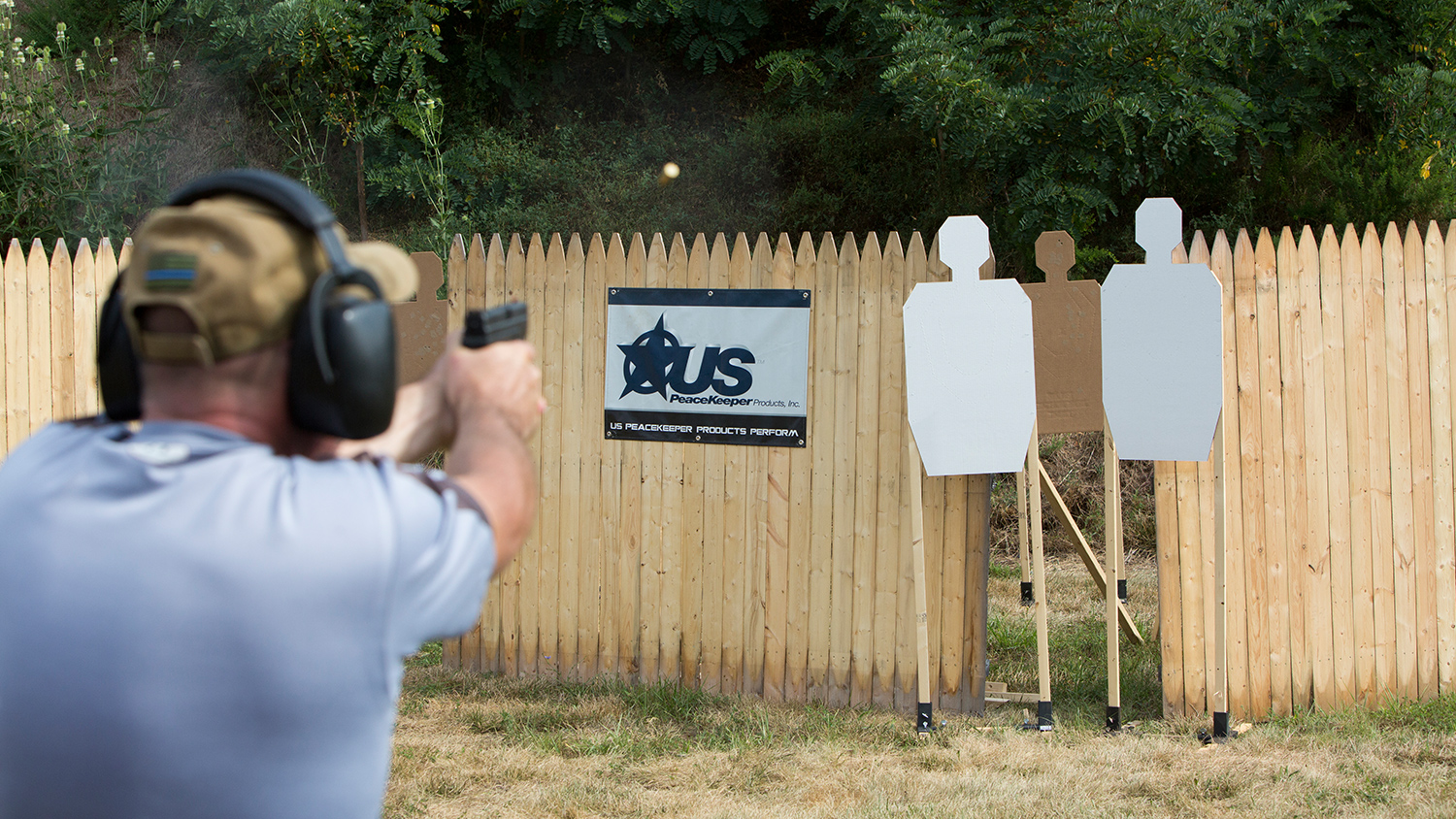 TPC courses have officers engaging threat targets (tan) with non-threats mixed in.
The Run it three times course at the Fairfax TPC Tournament had officers engaging targets with duty handguns and shotguns, again with non-threats mixed in with the threat targets. Shooters begin the course with their duty handgun and a steel target, quickly switching to TP-1 threat targets. Then the handgun is holstered and shooters engage a steel popper and multiple clays with their duty shotguns. Finally, the course ends with three steel targets fired on with the duty handgun.

Targets
The entire sport is built around the NRA tactical police target—the full-size TP-1 and its smaller cousin, the half-size TP-2. The TP-1 is an 18”x 36” piece of tan cardboard with white backing that fits in a standard IDPA/IPSC/TPC target frame. Both targets have hit zones (marked -0, -2, and -4) marked for assessing loss of accuracy penalties. To allow individuals to hold their own TPC events, the NRA allows the use of IPSC or IDPA targets by simply modifying the scoring to match TPC standards. 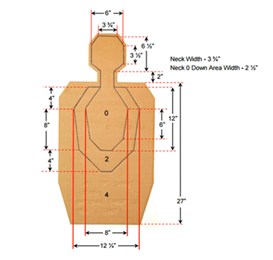 Paper targets must have at least two scored hits. Steel targets such as plate racks or poppers are scored hit or miss. Hits are called out by the RO for static targets, and reactive targets count when the steel falls. Frangible targets, such as sporting clays must break to be a hit.

END_OF_DOCUMENT_TOKEN_TO_BE_REPLACED

#SundayGunday: GForce Arms LVR410 | An Official Journal Of The NRA