Rimless .38 Super Brass: Everything You Need To Know

Rimless .38 Super Brass: Everything You Need To Know

Browning designed a few other rounds with semi-rims: .25 Auto and .32 Auto. Eventually, he dropped the semi-rim design and headspaced the rounds on the case mouth, such as the .380 Auto and .45 Auto.

Sometimes the small rim doesn’t catch the cutout in the barrel, and the cartridge slips a little farther in the chamber and is stopped by the extractor. This increases the headspace. The cartridge is farther from the slide face and when fired, this larger distance can result in an inconsistent position of the brass and accuracy can suffer.

John Rollins and Richard Shockley identified the problem and sleeved the barrel chamber so the cartridge headspaced off the case mouth, which they described in an article in the June 1961 issue of American Rifleman. When properly headspaced, .38 Super accuracy improved.

Eventually, manufacturers started to cut the chamber of .38 Super barrels to headspace on the case mouth, and probably all barrels today do this. This makes the semi-rim obsolete and unnecessary for modern pistols, but there are still plenty of old Colts around that benefit from the small rim—when it works. 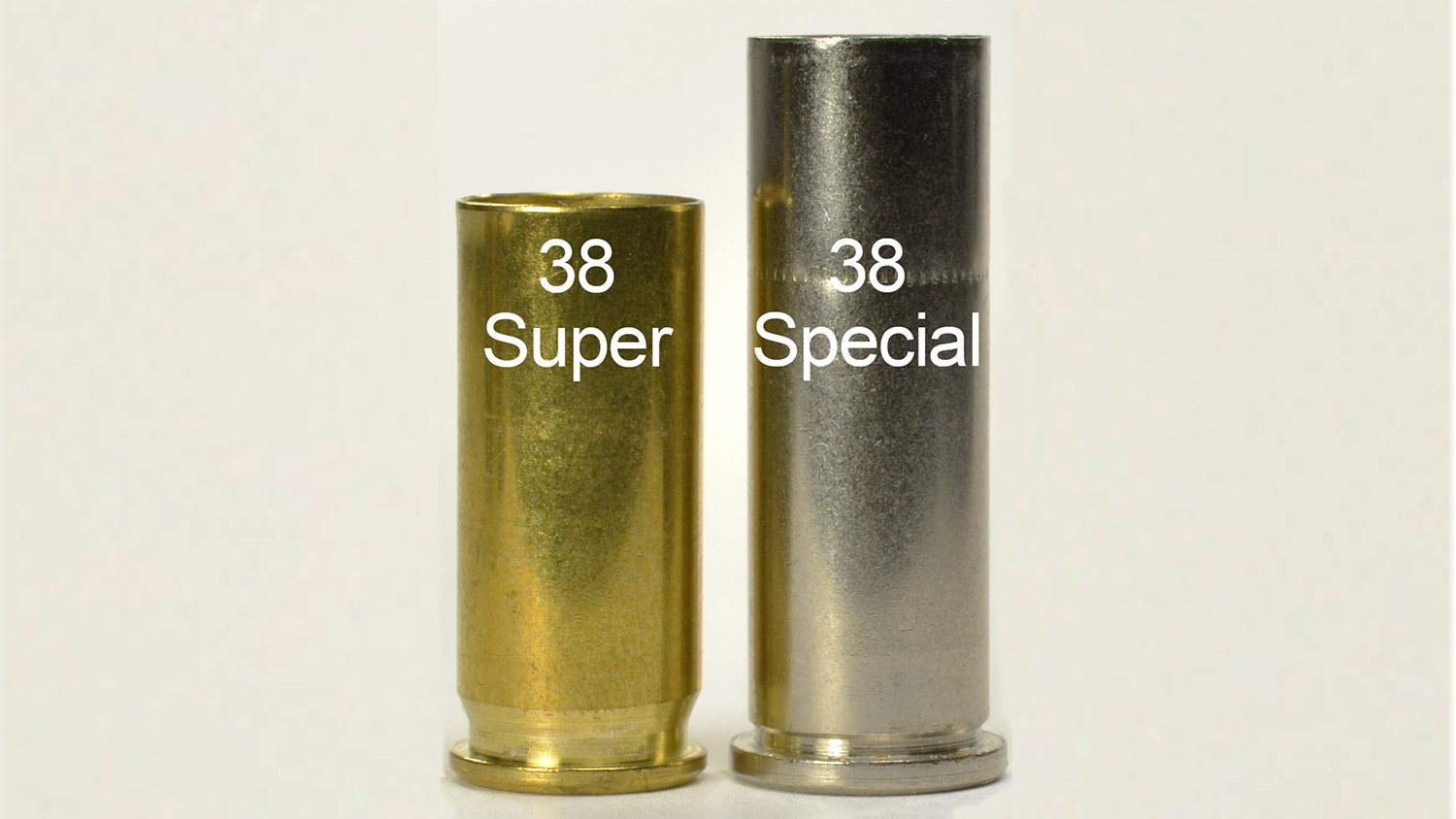 The .38 Super’s semi-rim is smaller than that of a .38 Special revolver round.

The semi-rim tends to feed well from single column magazines but can cause headaches when feeding from double-column magazines. Competition shooters who built high capacity .38 Super race guns would occasionally have problems with the semi-rimmed cases feeding from double-column magazines. This was exacerbated by the lightweight recoil springs they used with compensated barrels which slow the speed of the slide. Weaker recoil springs have less power to strip rounds from the magazine during feeding. The fix was to remove the semi-rim, thus the rimless .38 Super was born.

One problem people experience with the semi-rimmed cases is rim-lock. The rounds in the magazine lie at an angle such that the rim of the upper round is directly over the extractor groove of the underlying round. When the rim is wider than the case body, the rim protrudes into the extractor groove, and to strip the top round during feeding, the underlying round has to be pushed down against magazine spring pressure to allow the top round to move forward. A more protrusive rim has to push the underlying rounds deeper in the magazine. It takes more force to push a semi-rimmed case forward than a rimless one, therefore feeding with a rimless round is easier and smoother.

If you've ever tried to manually unload a fully loaded magazine of .38 Super ammo, you know how hard it is to get those first few rounds out. It feels like the rim of the top round is behind the rim of the underlying round. It’s not, but that’s how hard it can be to push the top round forward. Sometimes I’ll grab a screwdriver and pry those first few rounds out. It gets easier as the number of rounds is reduced. Keep in mind that your slide has to overcome that same resistance when stripping a round from the magazine. Rimless cases make that process easier.

Current rimless .38 Super brass is named .38 Super Comp. Nominal rim diameters measure 0.386 inch. This doesn’t remove the rim entirely, leaving the rim about 0.006-inch wider than the case body. Maybe it should be called a mini-rim.

It makes a big improvement in how smooth the rounds feed. A quick look at the numbers tells you why. The semi-rim protrudes about 0.010 to 0.011 inch past the case wall, whereas the mini-rim protrudes only 0.003-inch past the case wall. This means the semi-rimmed case has to push down the underlying cartridges over three times farther during feeding than the mini-rimmed cases.

Starline has been one of the leading producers of .38 Super Comp brass for many years. Recently, other manufacturers have added Super Comp cases, including Armscor, Hornady and Jagemann. Lapua used to made a rimless .38 Super case, but have not made them for over a decade. 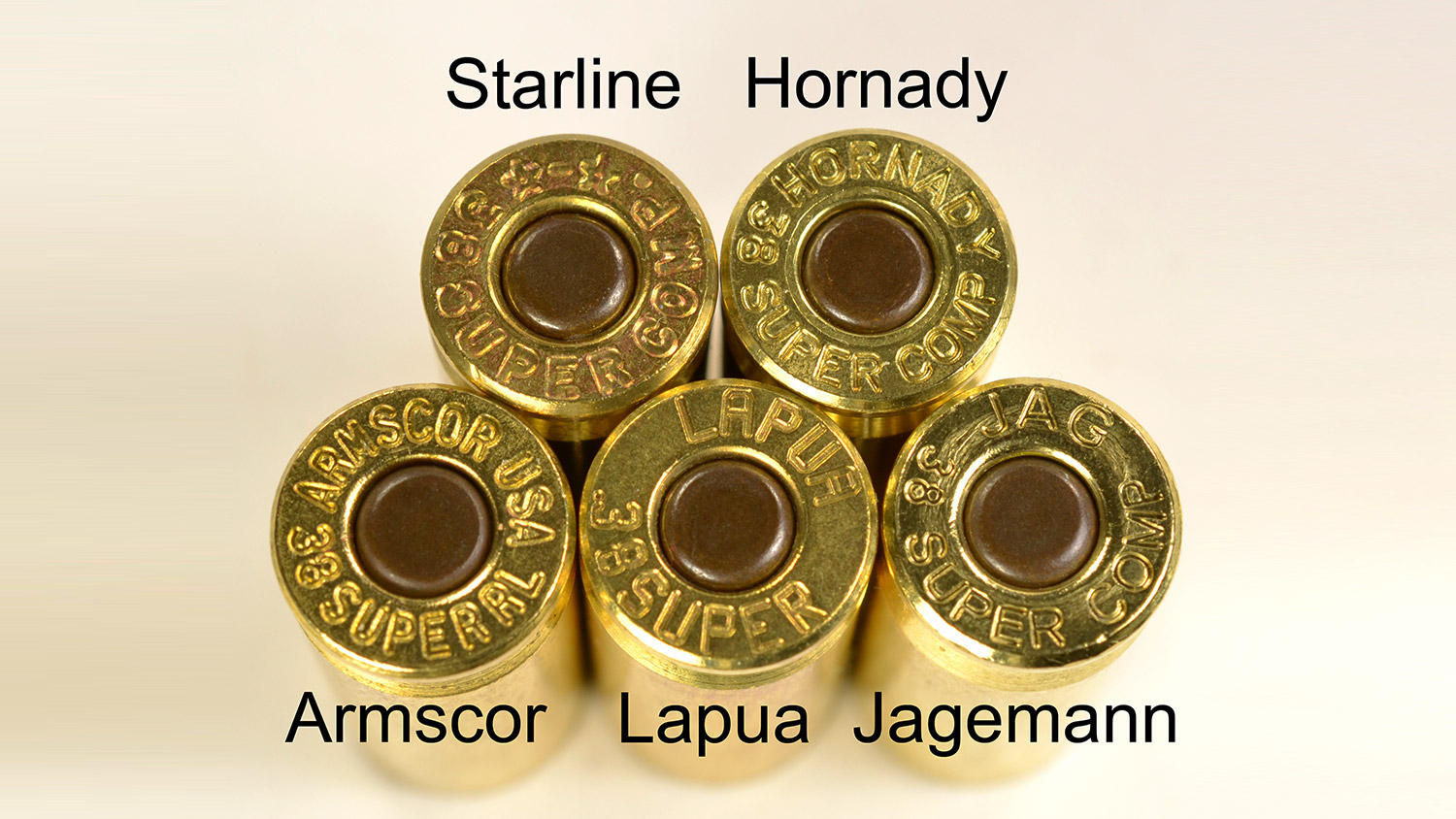 Armscor calls their rimless cases rimless (RL on the headstamp), not Super Comp. Like the Starline and Hornady versions, they have a mini-rim. Jagemann’s Super Comp really is rimless, at least that describes the ones I have. The rim measures the same diameter as the case body— 0.382 inch. They are like Lapua’s version of the .38 Super—the rim and the case body both measure 0.381 inch. 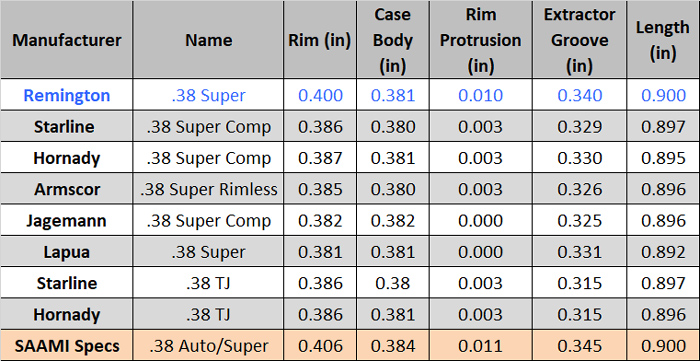 Dimensions of rimless .38 Super Comp and .38 TJ cases compared to a Remington semi-rimmed .38 Super case. The “rim protrusion” shows how far the rim extends past the case wall. The SAAMI dimensions are maximum dimensions.

The .38 Super Comp is not the only rimless .38 Super. Professional shooter Todd Jarrett designed his own version, and gave it a name with his initials, the .38 TJ. The distinct feature of the .38 TJ is that the extractor groove is deeper and wider than the Super Comp to aide in full length resizing. The .38 TJ is currently produced by Starline and was produced by Hornady in the past. Both of these cases have 0.386-inch mini-rims. 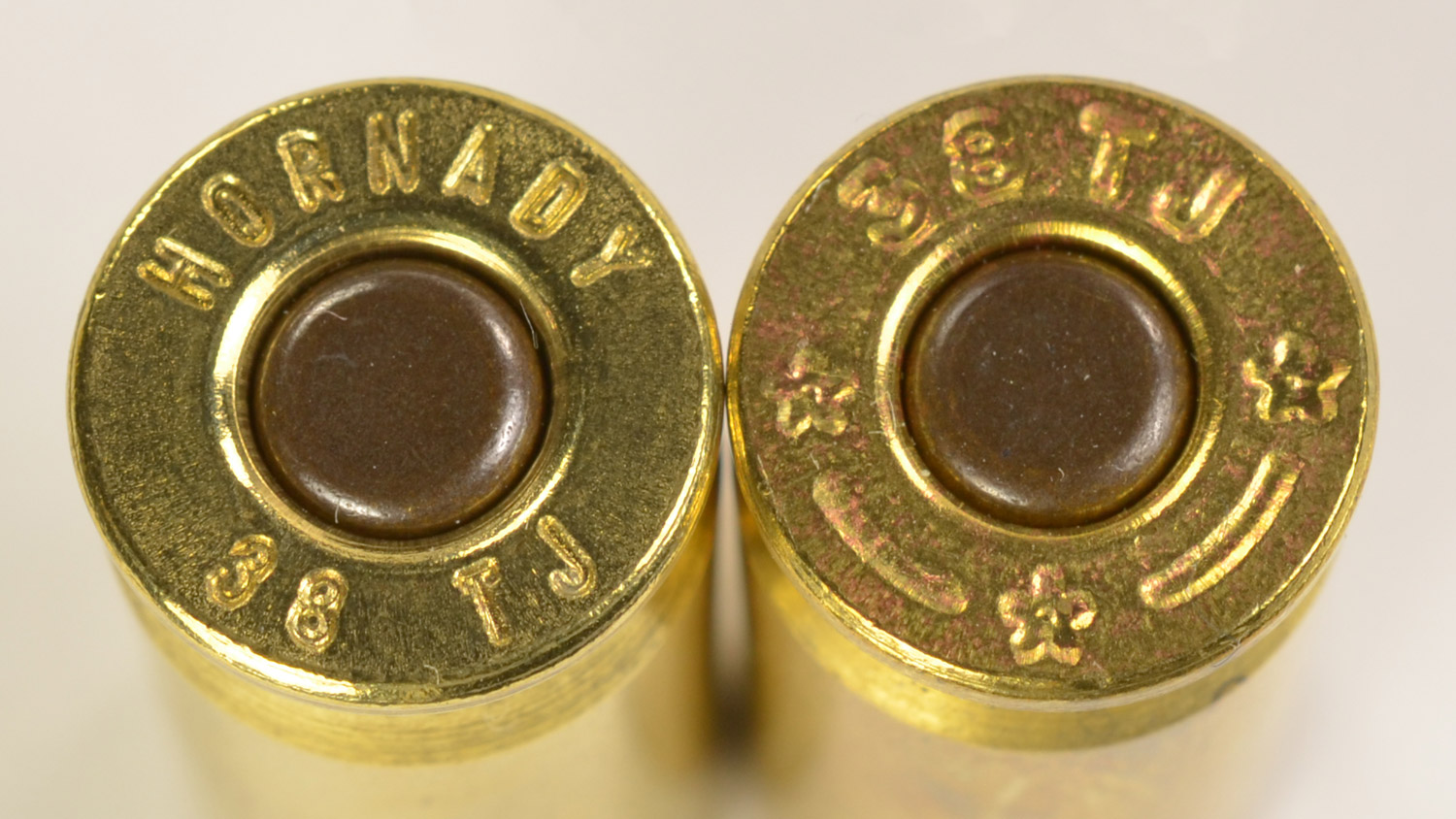 Only Starline currently produces the .38 TJ cases (right). They have a distinct extractor groove cut compared to the Super Comp cases. 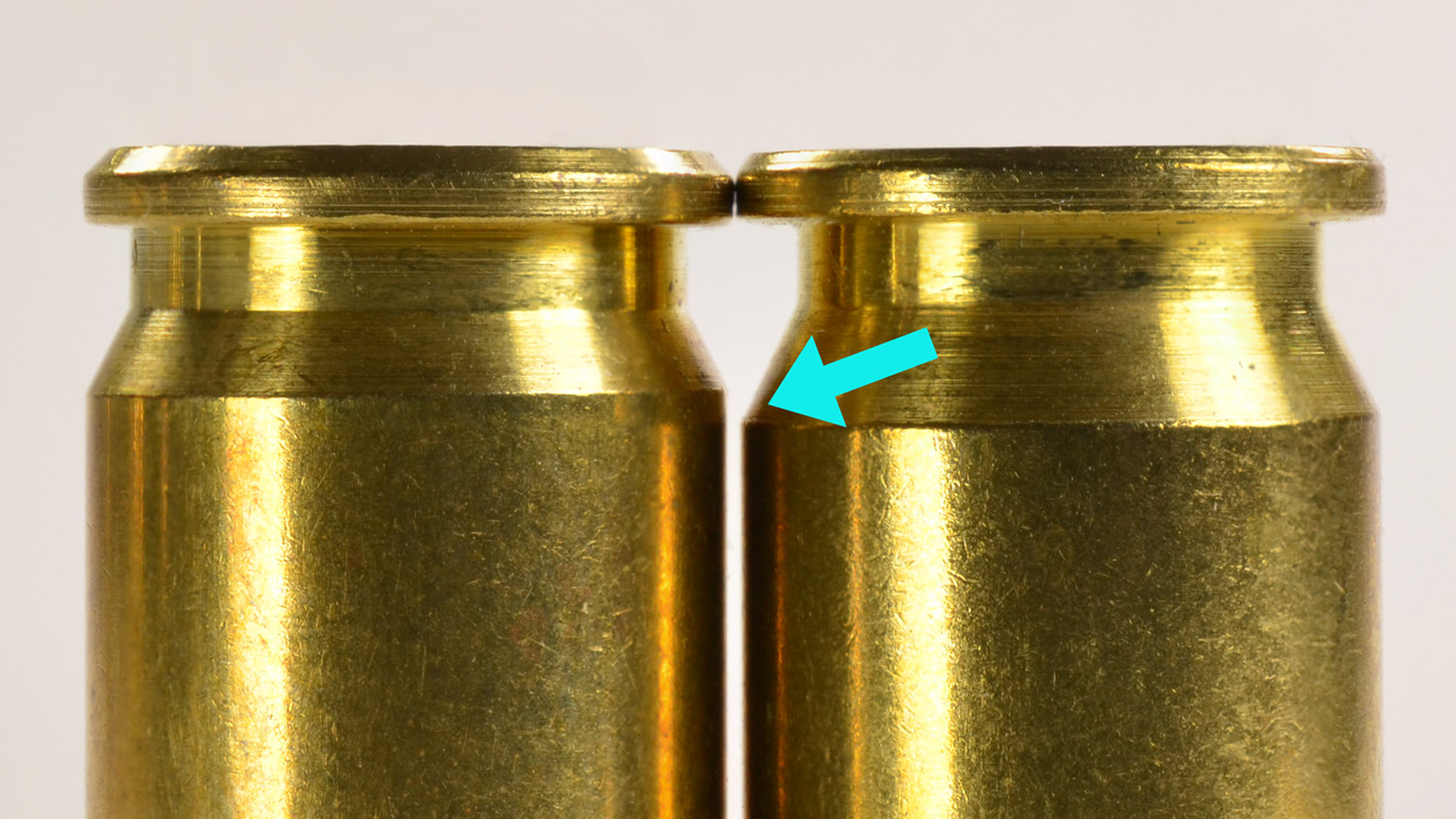 The arrow notes that the extractor groove on the .38 TJ (right) is a little wider than for the .38 Super Comp.

Another disadvantage of the semi-rim is that it encourages nosedive during feeding. Nosedive occurs when the round starts to get pushed forward out of the magazine by the slide during the feeding process. The front of the round cams downward as the slide engages the top of the rim, while the bottom of the rim drags along the underlying cartridge. The lower the nose of the round hits the feed ramp, it’s more likely that a jam will occur.

The gun (with the firing pin removed) was held in a vise and was video recorded at 1,000 fps as ammunition was stripped from the magazine and chambered. All rounds from a fully loaded 10-round McCormick .38 Super magazine were video recorded as the slide stop was released and the slide shot forward under recoil spring pressure. Measurements from the video assessed the round’s feed angle, which is its lowest angle prior to hitting the feed ramp. 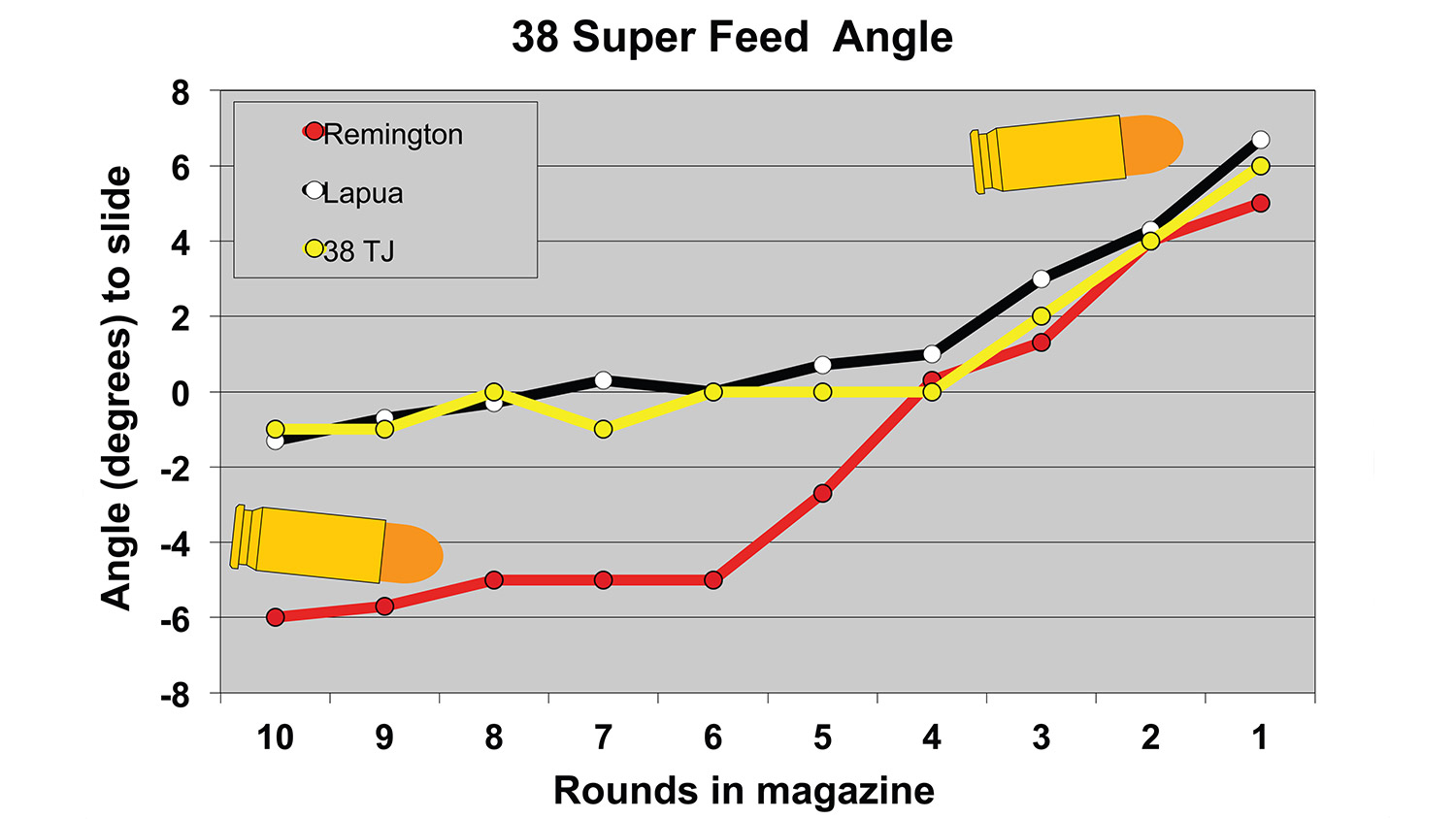 Feed angles of .38 Super ammunition shows the difference in feed angle of semi-rimmed (red line) and rimless cartridges (black and yellow lines) in a Colt pistol. The data for the Remington semi-rimmed brass and the Lapua rimless brass are each from the average of three full magazines (30 rounds of Remington, 30 rounds of Lapua). The data for the .38 TJ rimless brass was from one full magazine (10 rounds). All rounds were loaded with the same Remington 130-grain FMJ bullet to the same overall length of 1.265 inch.

Measured feed angles are shown in the plot. The left (Y) axis of the figure is the feed angle of the cartridge relative to the plane parallel with the slide. With 10 rounds in the magazine (far left), the cartridge nosedives the most. The Remington semi-rimmed ammo (red line) nosedived more and its feed angle for the first six rounds from the magazine was three to five degrees lower than the rimless Lapua and TJ cases. Once there are four rounds remaining in the magazine, semi-rimmed and rimless cases feed at the same angle for the remaining rounds.

The mini-rimmed .38 TJ cases fed at the same angle as the rimless Lapua cases, so the slight protrusion of the rim 0.003-inch farther than the case wall does not have a significant effect on nosedive or feed angle.

The semi-rim increases drag and nosedive and produces a lower feed angle for over half the rounds in the magazine. And it does so at the worst time―the first rounds from the magazine are when magazine spring pressure is highest which requires more energy to push the round forward, which can slow down the slide. This is when a nosedive jam is most likely.

The smaller rim means some extractors might need to be adjusted to work reliably with rimless cases. I have several .38 Super pistols and have used both semi-rimmed and rimless versions in these guns. Some of the extractors required no adjustment and work perfectly with both types of cases. Others had to be tuned to work with both types. If you use only rimless cases, adjust it for those, and you’re set.

Some folks have two different extractors, one tuned for semi-rimmed cases and the other for rimless, and install the one for whichever type of case they are using at the time. Aftec makes two different extractors for 1911 pistols, one for the .38 Super and another for .38 Super Comp and 9mm. The SAAMI specification maximum 9mm rim diameter is 0.394 inch, but real-world rims measure 0.386 to 0.390 inch, which is the same or close to rimless .38 Super Comp dimensions.

In one really rare instance, the ejector in one of my pistols had problems with rimless cases. In this gun, a 1911, the ejector position is ever so slightly a little farther from the midline than my other guns. Examination of fired cases showed the ejector mark barely on the edge of the rim of rimless brass, and sometimes it missed the rim completely, resulting in a failure to eject. This gun appears to be exceptional, and I’ve not seen any reports from other people on the internet having this problem. Sometimes there is pride in having an exceptional gun, but that doesn't apply for this one!

Many handload their .38 Super ammo, so using rimless brass exclusively is an easy option for them. People who shoot factory ammo have little choice—it’s almost all semi-rimmed. However, Atlanta Arms offers loads in .38 Super Comp brass. Precision Cartridge, Inc. also produces a load in Super Comp cases available at Graf’s and Selway Armory.

If you’ve never experienced a malfunction with semi-rimmed cases, there is little incentive to change from semi-rimmed to rimless—especially if you’re only using factory ammo. That said, the rimless brass does offer smoother feeding, so don’t dismiss the idea of it. The fact that several manufacturers are making rimless .38 Super cases indicates that it has a useful place. Handloaders should consider rimless .38 Super brass if they don’t already use it. Many people who try it don’t go back to semi-rimmed.

See more detailed information on nosedive and feed angle at this link.

Review: Stacatto 2011 P Pistols | An Official Journal Of The NRA

I Carry Spotlight: New for 2023 CZ-USA/Dan Wesson DWX Pistol | An Official Journal Of The NRA