The below is an excerpt from the 1978 book, Olympic Shooting, written by Col. Jim Crossman and published by the NRA.

Organized under the policy of sponsor's choice, the 1924 Olympic Games shooting program in Paris was markedly different than its predecessors. The previous Olympic year at Antwerp included a most extensive program, where the U.S. won nearly everything but the kitchen sink. But in the French program there was only one team and one individual match with the high power rifle, and one match with the smallbore rifle. Granted there were also two individual and two team running deer matches, but the U.S. had never taken the running deer match very seriously and had never picked anyone for the team based on ability over that course. The pistol program was reduced to one event, while clay pigeon remained at one team event and one individual event. 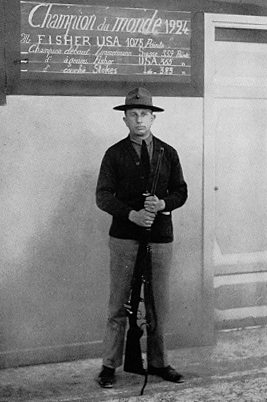 The frequent changes in type of match made it difficult for U.S. shooters to develop a program pointed towards the Olympics. In the years since the end of World War I, American shooters had become increasingly intrigued by the matches of the International Shooting Union. These matches were fired over the same courses-of-fire and under the same match conditions from year to year. Certainly they were largely based on the European types of competitive shooting, because the International Shooting Union was dominated by the European countries. The UIT was the international group promoting and conducting rifle and pistol matches. An UIT-sponsored match had been held at Camp Perry in 1913, including rifle, pistol and running deer events. In 1921 and 1922, the U.S. had sent teams overseas to the UIT championships. In 1923, Camp Perry was again the scene of the UIT matches—but no foreign teams showed up.

Rheims, France, was the site of the 1924 UIT Championships, held June 7-22. The 3-position, 120-shot free rifle match, shot in some of the earlier Olympics, was a standard course-of-fire in UIT shooting. In the same manner, the free pistol 60-shot match at 50 meters was standard with the UIT and had been included in some of the Olympics. Neither was included in the 1924 Olympics. 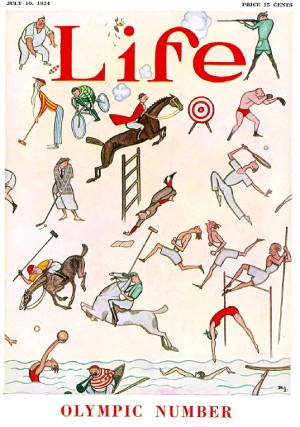 While U.S. shooters had done surprisingly well in the Olympic free rifle and free pistol matches, they had not always done so well in other free-gun championships. U.S. shooters felt, with some justification, that they were outgunned by the foreign equipment. They tended to sneer at the elaborate free rifles, with their long, heavy barrels, long sight radius, palm rests, set triggers, adjustable hooked buttplates and other refinements. While these rifles were impractical for military use for hunting or for shooting the U.S. courses-of-fire, they were designed to give the most possible points at the 300-meter 3-position match. The same was true of the foreign free pistols.

The rifle shooters finally decided that if they were going to play the 3-position game, they should get properly geared up for it. Consequently, during the early 1920s there developed a free rifle based on the Model 1903 Springfield action. This had an adjustable or replaceable hooked buttplate, a special stock, a heavy 30-inch barrel, a palm rest and set triggers, among the best being those made by Marine Frank Rimkunas. While the palm rest was usually a cork ball, different shooters had different ideas, the most extreme being Cmdr. Carl T. Osburn's metal mould [sic] into which his hand fitted like a glove, wrist and fingers pointed straight up.

Although some of the pistol shooters had free pistols of the European type, there were very few matches in this country that allowed this specialized gun. There was little effort make a free pistol here, so most American shooters interested in the international game made-do with the Colt or Smith & Wesson single-shot pistols. 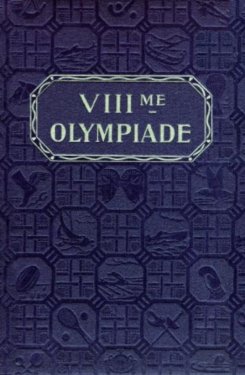 Cover of the Official Report of the Paris 1924 Olympic Games.

In looking at the whole shooting program for 1924, the rifle shooters decided that the UIT matches were of major importance and the Olympics were secondary. With a Pan American international match coming up later in the year in Argentina, and with the UIT and Olympic championships held so close together in both time and distance, it was decided to send only one team to Europe, perhaps a trifle larger than necessary for either match, in order to handle both championships. The rifle team was largely chosen on the basis of 300-meter free rifle scores, but the 800-meter stage was included in the results. The team members also shot the running deer course, although no one was especially selected for his skill on the deer.

The 40-shot standing event at 50 meters was one Olympic match which aroused the interest of the free rifle shooters. But there were no really good U.S. rifles designed for this course. Springfield Armory came to the rescue by hastily producing 12 fine free rifles in .22 caliber which matched the 300-meter rifles in weight, balance, sights, trigger and other details. In addition to being well suited to the offhand match, these rifles were very accurate for the day Using United States Cartridge Company's NRA .22 match ammunition, the rifles each fired five 10-shot groups at 50 yards. Only one shot of the 600 was outside of the 50-yard target's 1-inch 10-ring. With guns such like these, the shooters knew that high scores depended only on their own performance.

The big rifle shooting squad is listed below. With the exception of one man, this group shot in both the UIT matches and the Olympics.

The new ATA picked certain outstanding shooters from each of the zones into which they had divided the United States. Additional shooters, chosen from the country at large, made up the rest of the Olympic shotgun team. As in the previous Olympic year, one of the big drawing cards for making the trip was two weeks in England, shooting through the various English championships. Adding the English birds to the Olympics, this top-notch squad shot at more than 8,200 birds, breaking almost 96 percent of them.

Member of this hot aggregation were:

While the trapshooting squad was completely different from the 1920 team, the pistol shooters who went to France had one familiar name among them, A. Lane. Who could forget the boyish Alfred Lane and his three gold medals in 1912, as well as his additional glory in 1920? But a closer examination showed that the most recent A. Lane was not Alfred, but his brother Albert. Albert, as it turned out, did not shoot in the Olympics but did participate in the UIT championships. Of the large group of pistol shooters who went to France, Frazer, Whaling, Bailey and Betke shot on the Olympic squad, with Lt. Andino as team adjutant and Dr. R.H. Sayre as team captain. 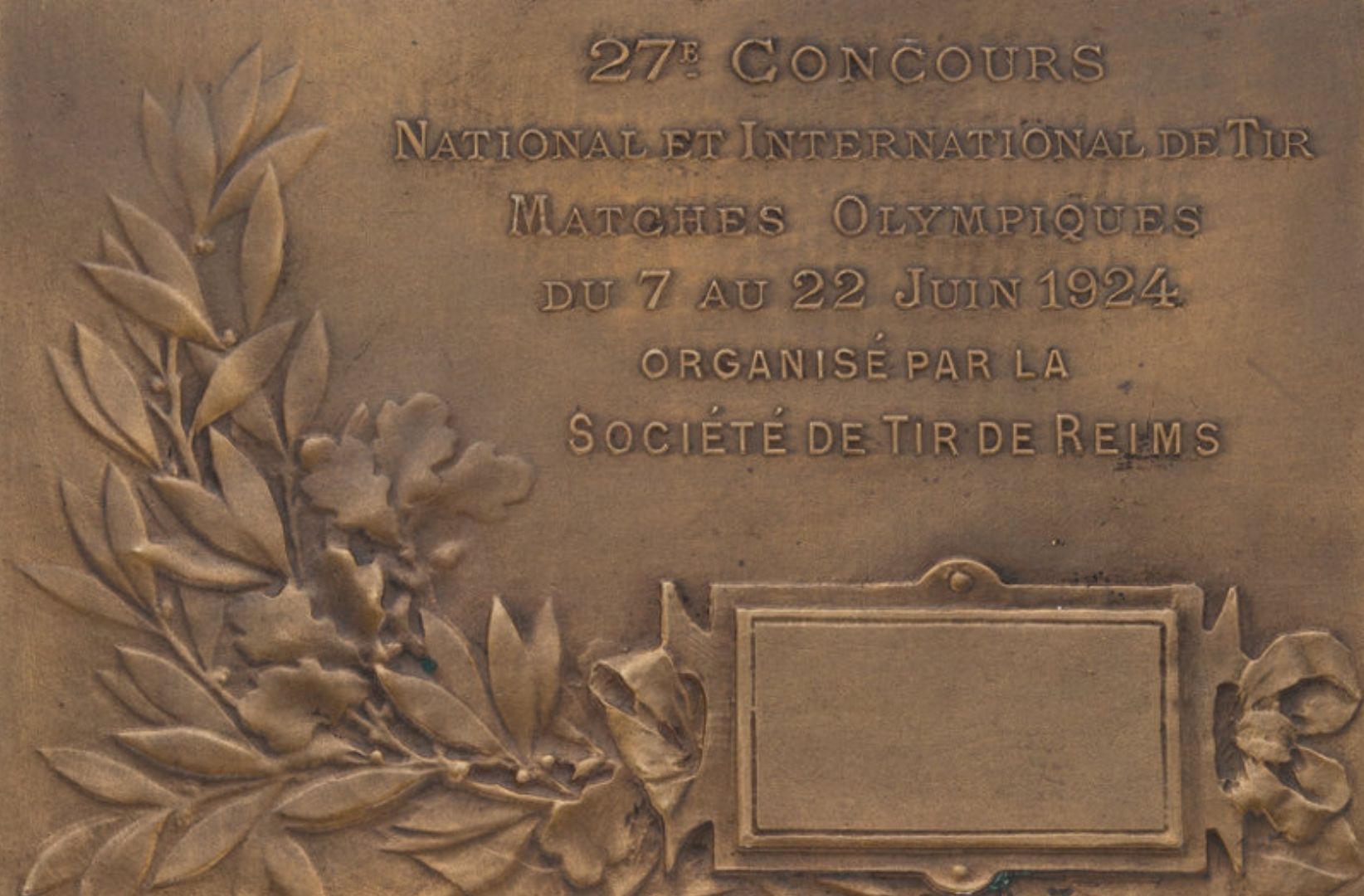 The French were fond of the dueling event and before the turn of the century the Gastinne-Renette galleries in Paris were world famous for their dueling-type matches. Although shut down by the occupation of World War I, the galleries were later opened again. In 1900 when France had held the Games, a dueling match was included. So it was no great surprise to find a dueling match in 1924, although it was some disappointment to find it was the only handgun event scheduled. A dueling match in 1912 consisted of a series of single shots on a silhouette target exposed three seconds per shot. The 1924 event, rather than being a person-to-person affair, was more like a mob scene. Six man-sized silhouette targets, 30 inches apart and at a range of 25 meters, were exposed simultaneously for 10 seconds, and the shooter fired one shot on each. The match was three strings, or 18 shots. The rules provided that all those tied after the 18 shots would shoot off in single strings of six shots, but with the time reduced to eight seconds. Although the target had scoring rings, they did not count, only hits or misses being scored.

Of the group which went to France for the UIT and Olympic matches, the following were selected for the Olympic squad:

At the end of the match, eight out of the 66 competitors had come through clean, without a miss, with Sgt. Bailey as the only U.S. shooter in the group. In the first shoot-off string, everyone again went clean, but the second try dropped three shooters. The third, fourth and fifth strings each eliminated one more shooter, leaving only Bailey and Sweden's Carlberg. The two of them again went clean, but on the next string, Bailey had a heartbreaker, the thing they all feared—a malfunction.

The rules were specific about this. A malfunction of gun or ammunition was just too bad, the number of hits you made counted, and that was it. Bailey's .22 autoloader failed to eject properly after his first shot. But instead of giving up, he reached out with his free hand, removed the fired case, closed the action and squeezed off five more hits. Bailey's coolness and skill so unnerved his opponent that he snatched two misses to give Bailey a well-earned gold medal. And that was the sum total of the pistol shooting in the 1924 Games.

Read Part 2 of our look back at the Paris 1924 Olympic Games.

Henry Brass Axe | An Official Journal Of The NRA