by posted on February 27, 2017
Videos News Videos
Support NRA DONATE
Watch the video above of the testing process described in this article. Using the same Krieger barrel, lower and upper, the Gas Piston gun upset the barrel harmonics enough to degrade accuracy for a match gun intended for 1/2 MOA accuracy on paper targets. Each gun fired three groups of five rounds with cleaning in between each group and a cool-off period of 60 seconds per shot.

Master gunsmith and builder David Sams approached us with the idea of settling a nagging question about the effect that a gas piston modification might have on an AR-15’s accuracy. Keep in mind that when Sams says “accuracy,” he’s talking about sub minute-of-angle (MOA) design methods learned while at the U.S. Army Marksmanship Unit. Sams’ experience making world-class match guns and frequent discussions with industry experts led him to question the wisdom of re-designing the AR-15 match grade rifle to accommodate a gas piston design. “Why fix what isn’t broken?” For an objective review, Sams invited us to participate in head-to-head tests. Sams would build the common platform to be used for both tests and we would serve as spotter, videographer and scorer.

Early experiments with automatic firearms tried harnessing the power of recoil to keep things running. In modifications that followed, direct gas impingement (just the gas) and gas piston (gas plus a metal operating rod) designs were used to cycle the action. 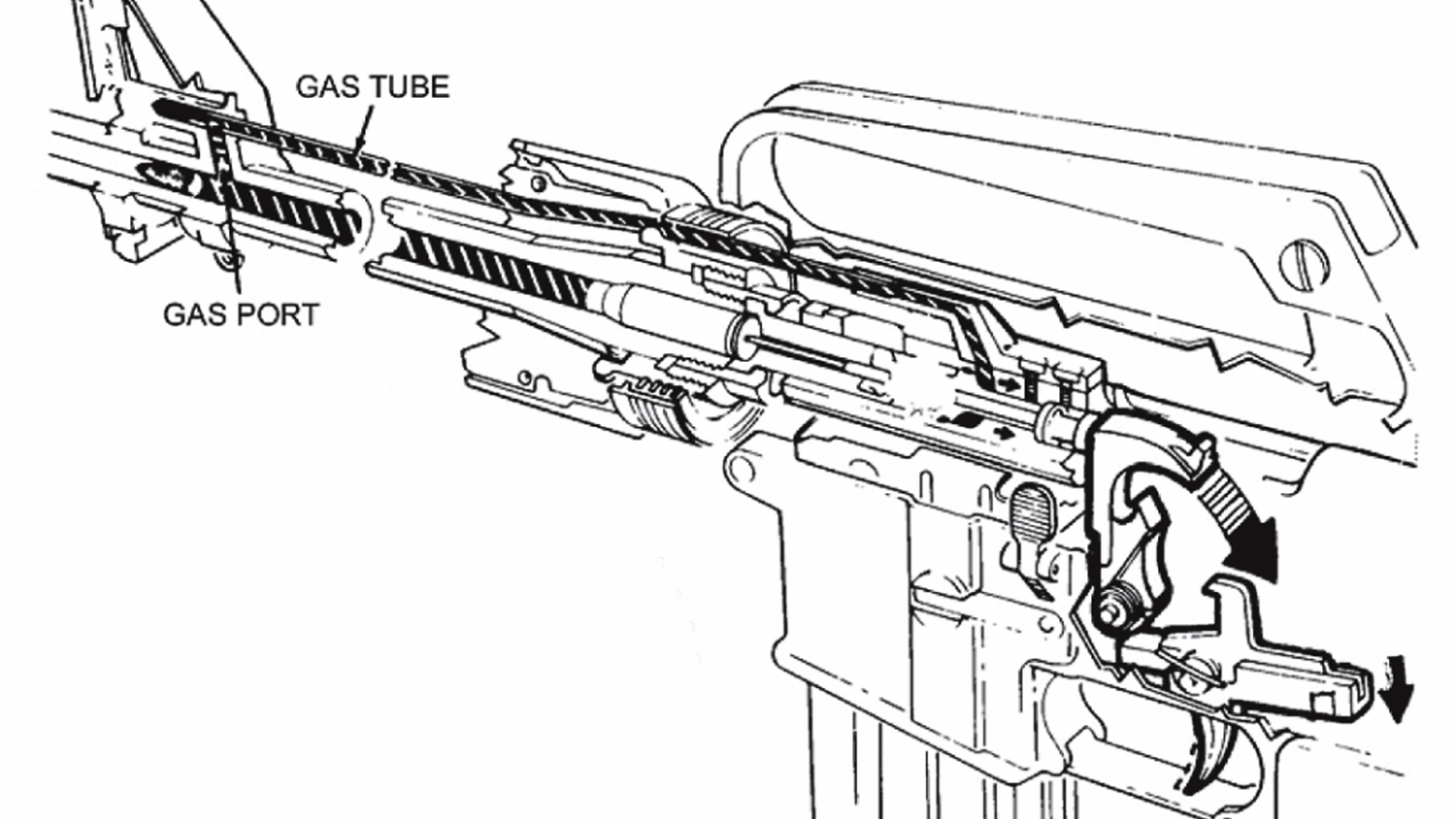 This photo illustrates the path of the gas (black with white stripe) in a direct gas impingement action used to push the bolt carrier. Note that the bullet has not yet exited the barrel. U.S. Army FM 23-9, M16A1 Rifle and Rifle Marksmanship.
Gas piston guns are designed from the ground up to withstand the rigors of metal-to-metal impact by using steel components. When Eugene Stoner chose direct gas impingement for his AR-15 design, he drew upon his aviation experience with aluminum castings to lighten the soldier’s combat load. The result was a replacement for the M14 that weighed 5 pounds less. Aside from some initial wrangling over the proper ammunition for a system that relied on gas pressure for proper cycling, Stoner’s combination of aluminum and gas proved to be an unqualified success. So why would someone want to change it?

The gas piston alternative found in proven battle guns like the FN49, AK-47, FN FAL and M14 uses gas pressure to mechanically move the bolt carrier with an impact from the rod, rather than a push with gas. To this end, gas piston guns are almost universally built with heavy steel actions, rather than aluminum. And as for claims of reduced fouling and cooler cycling with a gas piston system: Those who have competed with the M14 remember cleaning the gas port and piston, as well as the bolt. And in terms of match accuracy, moving the heat from the bolt area to the muzzle is of questionable value.

So why would someone want to change a working match AR-15 from direct gas impingement to gas piston? That’s what we set out to learn. New products in the market offer shooters the choices of converting their aluminum “gas” gun to a gas piston design, purchasing a new upper receiver, or a ready-made gas piston rifle. In either case, Sams’ hypothesis (admittedly with a bias of one devoted to creating sub-MOA match guns) was that any component that adds vibration to the system before the bullet leaves the muzzle would reduce accuracy. And if we add steel parts to an aluminum receiver, we may also expect reduced longevity.

Sams built an upper receiver around a Krieger match barrel, floating handguard and 24-power scope. He then added a lower receiver and match trigger to serve as the common platform for both tests. To convert the direct gas impingement system to gas piston, Sams used a commercially available drop-in kit that included a different front sight containing the gas cylinder, piston, operating rod and modified bolt carrier that replaced the gas key with a stud. The kit’s bolt carrier also has raised “lands” on the end that enters the buffer tube to reduce yawing as the operating rod strikes the carrier stud high above the carrier axis. 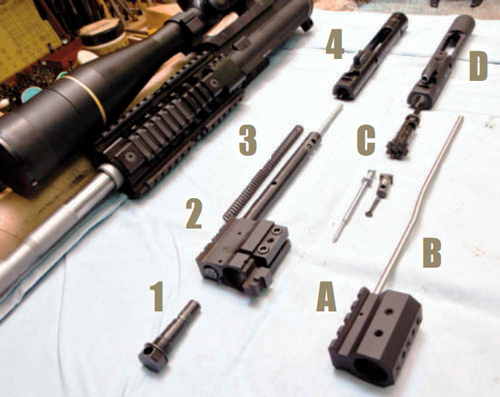 A typical gas piston system includes 1: gas piston adjustment; 2: gas cylinder block; 3: gas rod/piston; 4: reinforced key and bolt carrier, using the same bolt in both systems. The direct gas impingement system includes A: gas block; B: gas tube; C: bolt, fi ring pin and cam pin used in both systems; D: bolt carrier.
We conducted the test from a sandbag rest at 200 yards. The gas piston gun was shot first, followed by an action swap to direct gas impingement, using the same barrel, free-floating hand guard, upper receiver, scope, lower receiver and match ammunition. The hand-lapped match barrel had 15 rounds through it for break-in, using a shoot-one-clean-one method. During the two-hour test, temperatures rose by 3 degrees Celsius and a 2 to 3 mph breeze from 9 o’clock began half way through the firing of the direct gas impingement gun, giving a slight weather edge to the gas piston gun.

Our test rifle had no flash suppressor to avoid the accuracy-robbing effect of torque when swapping the front sight during the test. 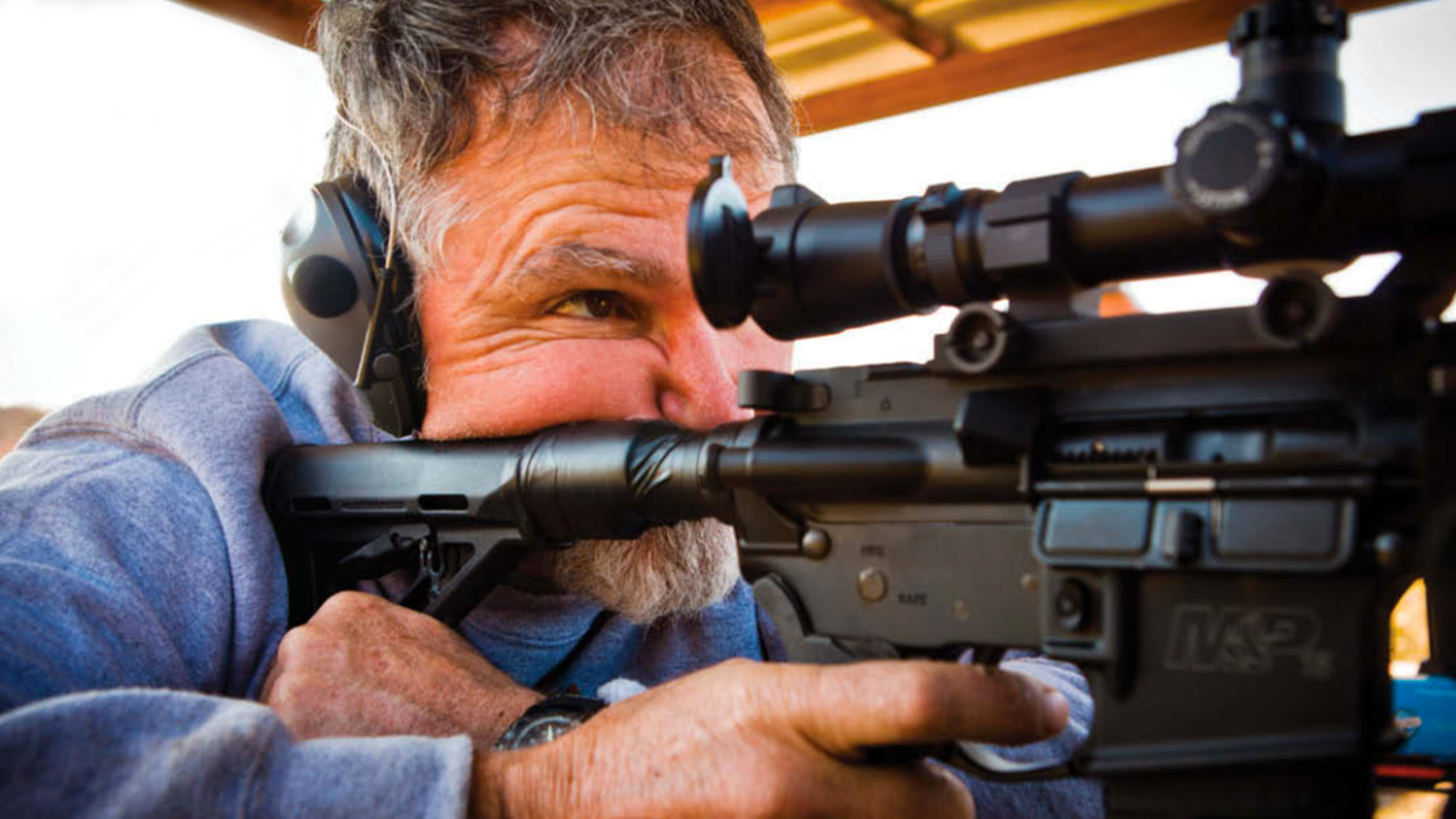 David Sams—former AMU master gunsmith, 25-year veteran gun builder and now owner of Sams Custom Gunworks—was the shooter for all three tests.
Configuration #3 (fired third)
To further investigate the cause and effect relationship, we fired a separate gas piston rifle with a Sams-designed stabilizer. Similar to a match grade M14/M1A where pressure between the front band and front stock ferrule stabilizes the barrel. Sams’ stabilizer allowed us to incrementally tune the barrel with different pressure applied near the muzzle. During subsequent firings and adjustments of the stabilizer, group size was reduced dramatically. The fact that the gas piston gun’s accuracy could be improved solely through the adjustment of the barrel stabilizer lent credibility to the conclusion that harmonics in the gas piston gun contributed to lost accuracy, a conclusion shared by other industry experts including Dave Emary, Chief Ballistic Scientist for Hornady Manufacturing.

To reduce human error when measuring groups, we used Jeff Block’s OnTarget software available from www.ontargetshooting.com. Block’s well-designed software allows the user to scan the target (or take a digital photograph) and enlarge the image for more accurate measurements. By using the proportionally correct graphic circle tool for the .224 caliber bullets used in the test, we were able to compare group sizes with greater accuracy than traditional methods.

The Results from 200 Yards

During this phase, the gas piston gun had three failures to eject.

The results of this review lead us to conclude that adding the mechanical components found in a gas piston modification, without further efforts to stabilize the barrel, reduces accuracy in a gun initially designed as a direct gas impingement system. We also concluded that this accuracy loss is the result of harmonic distortion of the barrel. Though beyond the scope of our tests, there are additional measures to be taken to fine-tune any firearm. These include tailoring hand-loaded ammunition to the gun, a weighted muzzle extension and, in gas-piston guns that offer it, pressure adjustments in the gas cylinder.

Whether aimed at an X-ring or a steel silhouette, there are no doubt other criteria that will influence a shooter’s choices for these types of guns. The debate of moving heat and fouling from the receiver of a direct gas impingement gun to the muzzle of a gas piston gun will no doubt continue, along with a lively exchange on the trade-offs of sub-MOA accuracy versus cyclic rate and reliability. And if this article encourages additional testing and dialogue, all the better!

What’s the Difference Between a Flinch and Trigger Jerk? | An Official Journal Of The NRA