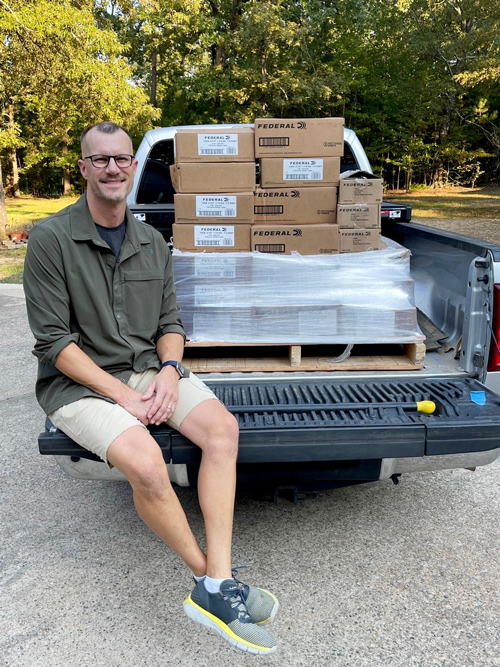 Tom from Arkansas, pictured here with his prize package containing more than 54,000 rounds of Federal ammo.

After receiving the prize, Tom said that he will share with the ammo with loved ones, as well as his son’s high school trap team. “I give my sincerest thanks to Federal Ammunition for this undeserving prize,” he said. “This ammunition will be a blessing to both my family and friends.”

“This sweepstakes was a great way to accentuate Federal’s 100-year anniversary celebration,” said Federal Ammunition’s Director of Marketing, Brian Anderson. “The scope of the ammunition included in the prize package showcases the wide range of ammunition and innovation throughout Federal’s 100-year history. This was a fun sweepstakes event, and we congratulate the winner.”

Congratulations, Tom! We know you will have fun with all that ammo.

To learn more about Federal Ammunition, go to federalpremium.com.

END_OF_DOCUMENT_TOKEN_TO_BE_REPLACED

There were 427 competitors that tackled 19 stages at the 2022 USPSA Carry Optics Nationals, held in September at the CMP Marksmanship Park in Talladega, Alabama

NRA Hunters' Leadership Forum | The Art of a Thanksgiving Hunt