5 Tips To Help You Win Trophies With A Revolver

5 Tips To Help You Win Trophies With A Revolver

Revolvers are not the most prominent guns in action shooting competition, unless you’re shooting a match governed by the International Confederation of Revolver Enthusiasts (ICORE). But every action pistol game has specific divisions for them―and there are those who relish the challenge.

Double-action (DA) revolvers have often been called “the thinking man’s gun.” And, that thinking should start before a shooter pays their first match entrance fee. Here are five tips that will help you tune your wheelgun for competition.

5. Experiment with grips. Just because they came on the gun doesn’t mean the grips will be right for you. Very few (if any) upper-level revolver competitors shoot factory grips. Given the long DA revolver trigger pull (which can cause hand shifting), recoil control, and the other complex hand manipulations during the reloading/grip re-acquisition process needed to succeed with a wheelgun, “One size doesn't fit all.” Yet, a positive and repeatable grip is critical for revolver shooters. 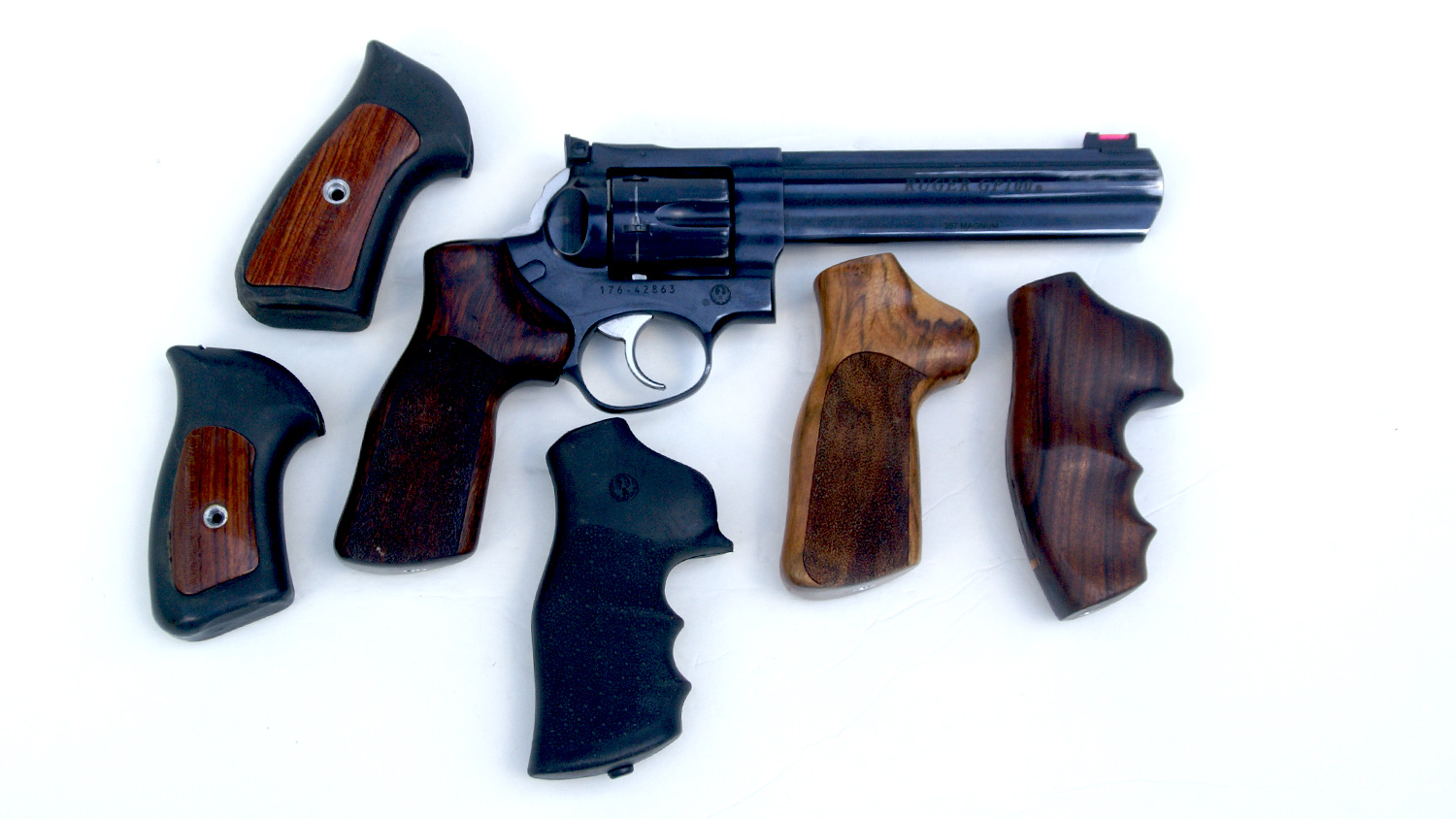 No two shooter’s hands are the same. Finding the grips that fit yours is an important step for fast and accurate revolver shooting.

It can pay to play with different grips. Hogue is one grip-maker with a large competitive following, although there are others. Finding grips that fit your hand is an important step to success.

4. Smooth and radius the trigger for DA shooting. Action revolver shooting is done in a DA mode, and often rapidly. Once the BEEP sounds and the gun is presented to the first target, the only time the trigger finger leaves the trigger is to reload. If the finger and trigger aren’t comfortable together―performance suffers. A smooth, well-rounded trigger is a major asset. 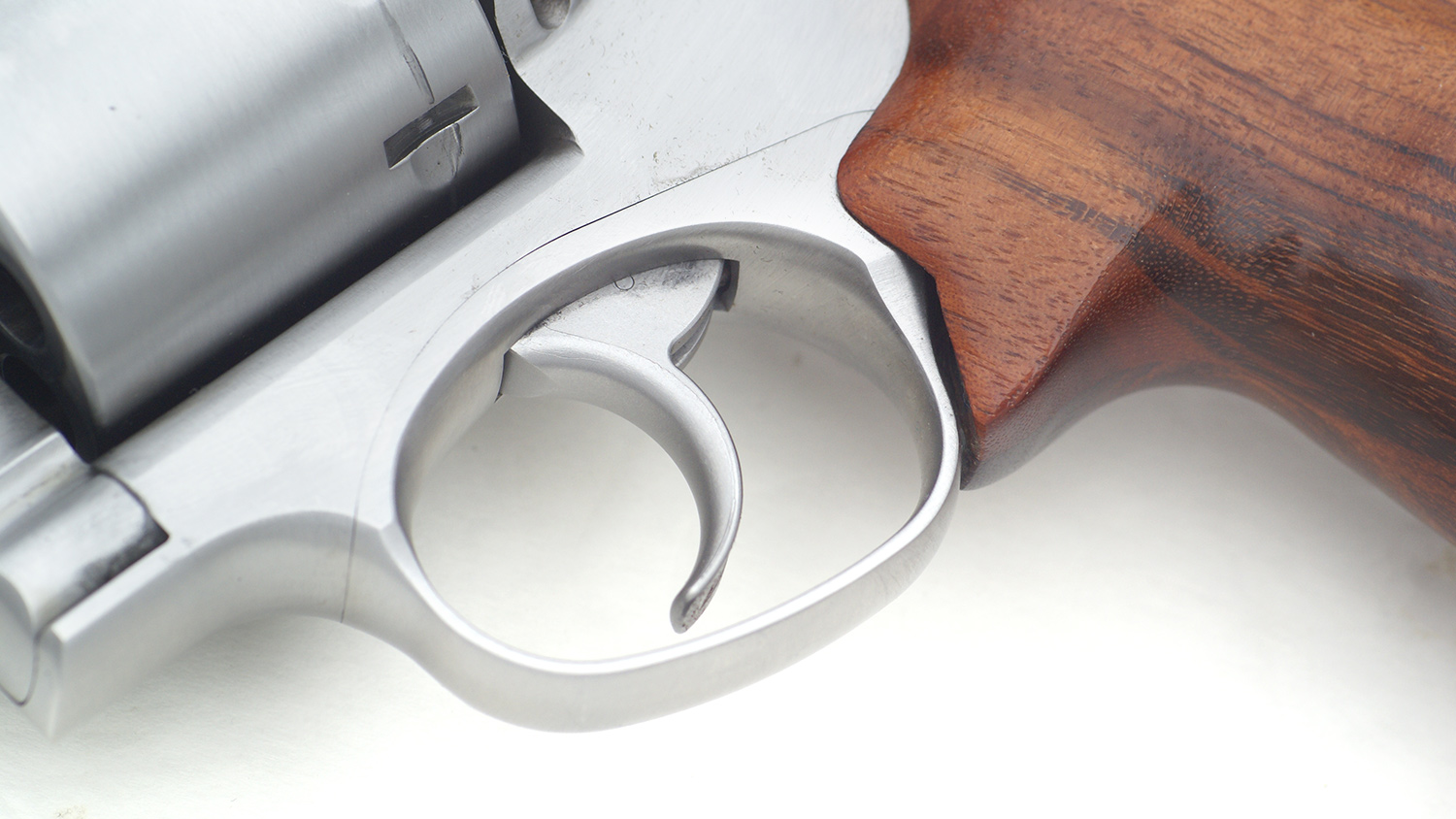 A smooth, properly-shaped trigger is a major asset for DA shooting.

Not all factory revolver triggers are properly-shaped for this. Some have ridges on the trigger face, sharp edges and other protrusions. My two older Ruger GP-100 revolver triggers came from the factory with sharp side edges and a sharp lower protrusion. A 50-round practice session raised a welt. I re-shaped the trigger with a Dremel tool and a cutting bit, followed by a polishing bit. For those not into DIY gun repair, this is a simple job for a competent gunsmith.

If you finish a 100-round practice session and your trigger finger isn’t smiling at you, the trigger needs some work.

3. Polish and chamfer chambers. Getting the fired cases out of the revolver’s cylinder is half the reloading process, and it’s on the clock. Modern manufacturing methods don’t help because they will leave machining marks in each chamber. These can grab powder fouling that leaves a sticky residue and impedes smooth extraction. 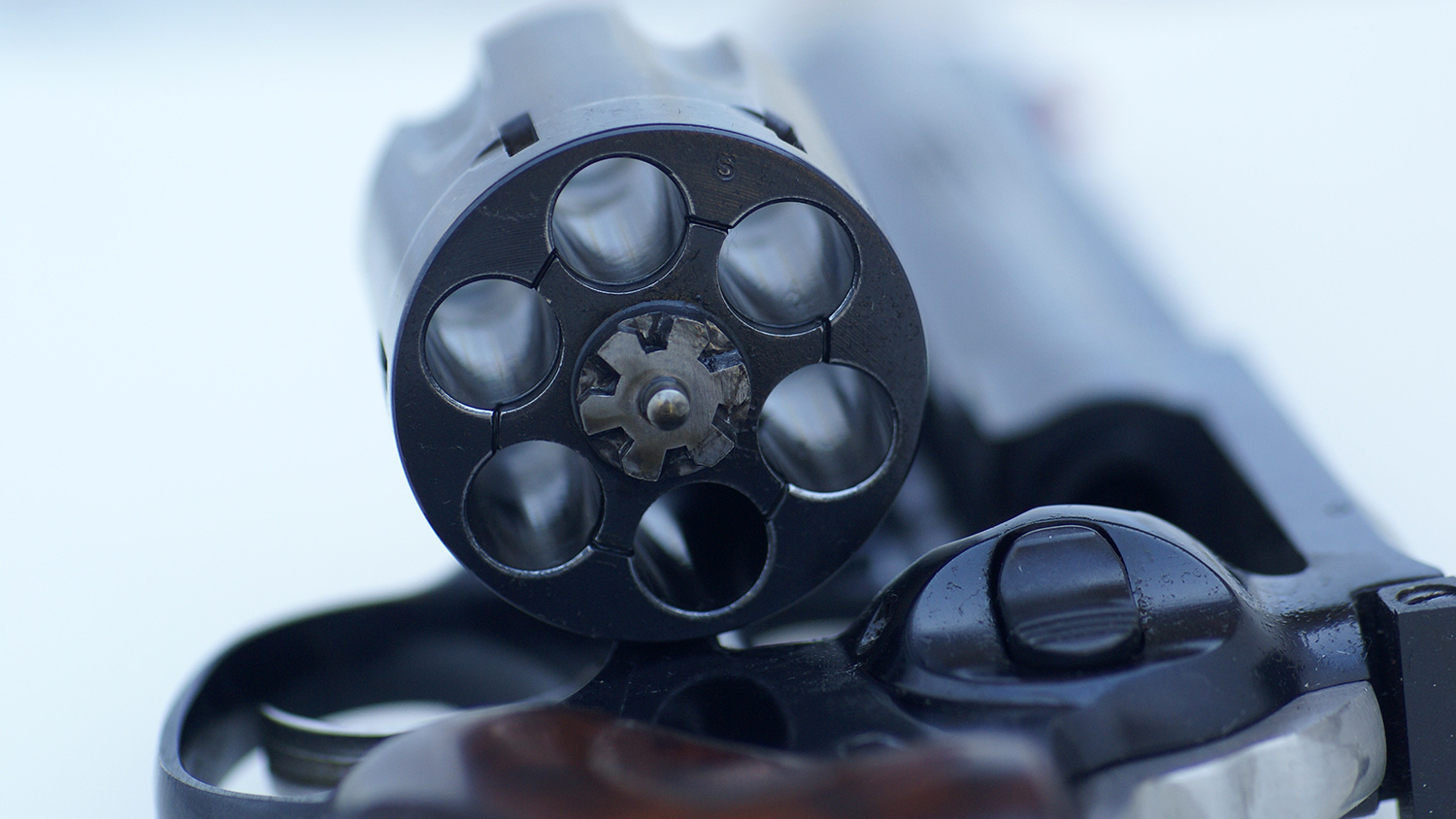 The process of polishing and chamfering the chamber will speed up extraction and reloading.

Polishing the interior of the chambers goes a long way in correcting that by preventing the buildup. It is a simple job for a competent gunsmith. Brownells also offer a honing kit that allow you to do it at home.

This is not overly critical for moon-clip shooters using short cases (9mm, .38 Short Colt, .40 S&W, .45 ACP) since the ejector rod stroke is long enough to clear that one solid mass from the cylinder. With .38 Special, or .38 Long Colt cases using speedloaders―it is critical! Instead of one mass, there are now six individual lightweight objects to move. And the ejector rod stroke isn’t long enough by itself to do it (unlike the short moon clip cases). Life is not good when you bring your speedloader to the cylinder, find one or more cases didn’t want to leave the chamber and need to be pried out with the fingers. All while you juggle the speedloader. Polished chambers gives gravity a boost.

Adding a light chamfer to the chamber mouths helps break up the sharp chamber edge and speeds bullet insertion. It’s not overly critical for those using round-nose bullets, but those shooting wadcutters and semi-wadcutters will appreciate the help.

2. Trigger work. It’s a rare double-action revolver that leaves the factory with a DA pull weight less than 12 pounds. Most are in the 12- to 14-pound range and there is a logical reason for it—the gun has to be able to fire any commercially-manufactured cartridge it is fed or the maker starts getting “Nastygrams.” 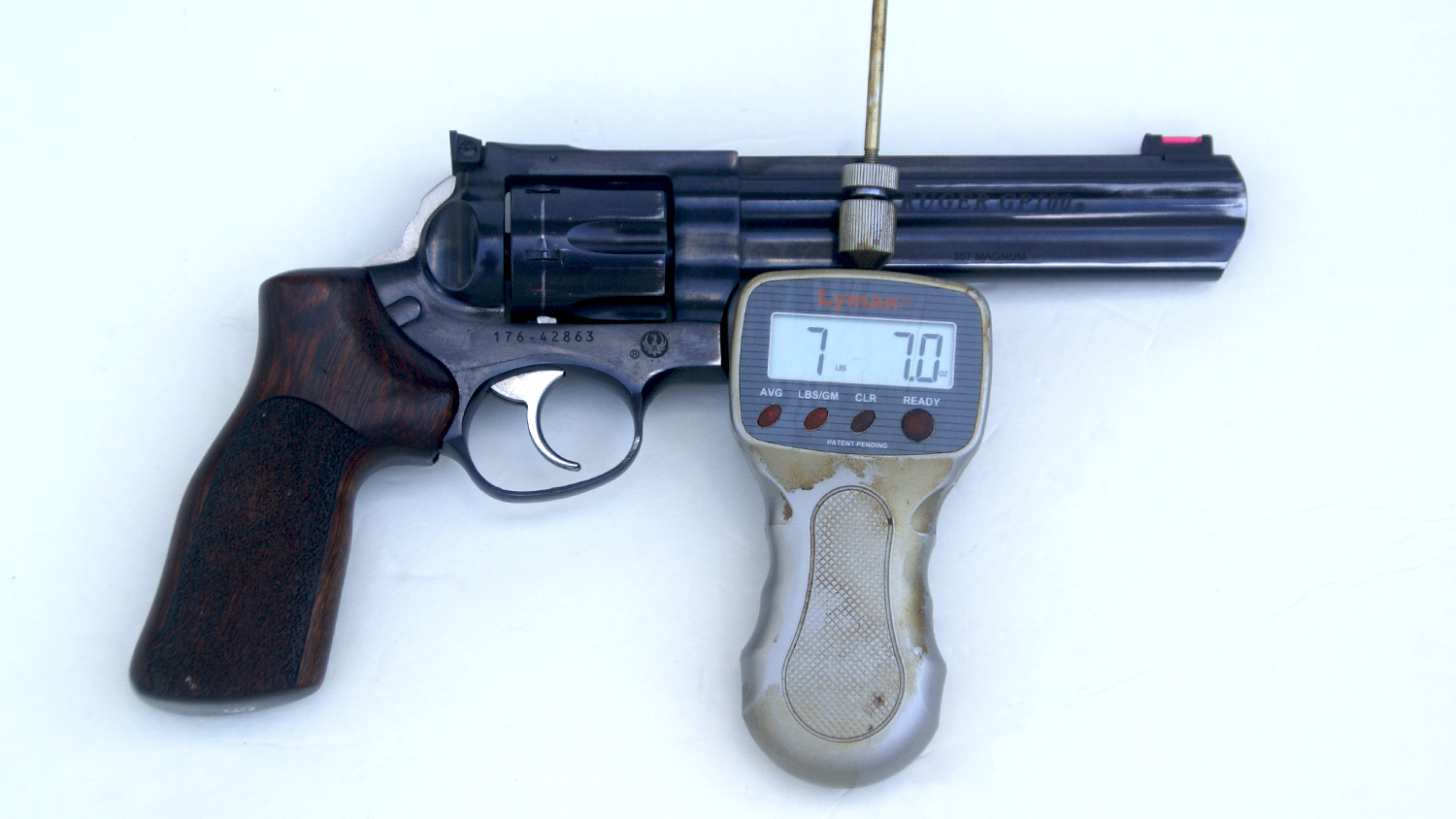 That’s a heavier trigger than many competitive revolver shooters want to deal with and most will do a trigger job to lighten the pull weight. My two GP-100 revolvers have a buttery-smooth DA pull just under eight pounds (thanks to a Wolff spring kit and some internal polishing). Some S&W revolvers can be reduced to the six- to seven-pound range, although that can also involve replacing the firing pin with an over length model. They’re a joy to shoot. But shooters need to remember why factory pulls are so heavy in the first place.

My guns are not totally reliable with any primer but Federal. And, my handloads have to be carefully assembled to achieve that. The primers need to be seated to what is commonly called a “crush fit”—.006 to .008 below flush with the cartridge base. I have to feel that “dip” when I brush my finger over a loaded round. This assures that the strike from the lightened mainspring will give you a bang instead of a click. When DA pull weights are lightened shooters have to be very aware of proper reloading procedure, and realize that they can’t just buy a couple of boxes of factory loads and head to a match. 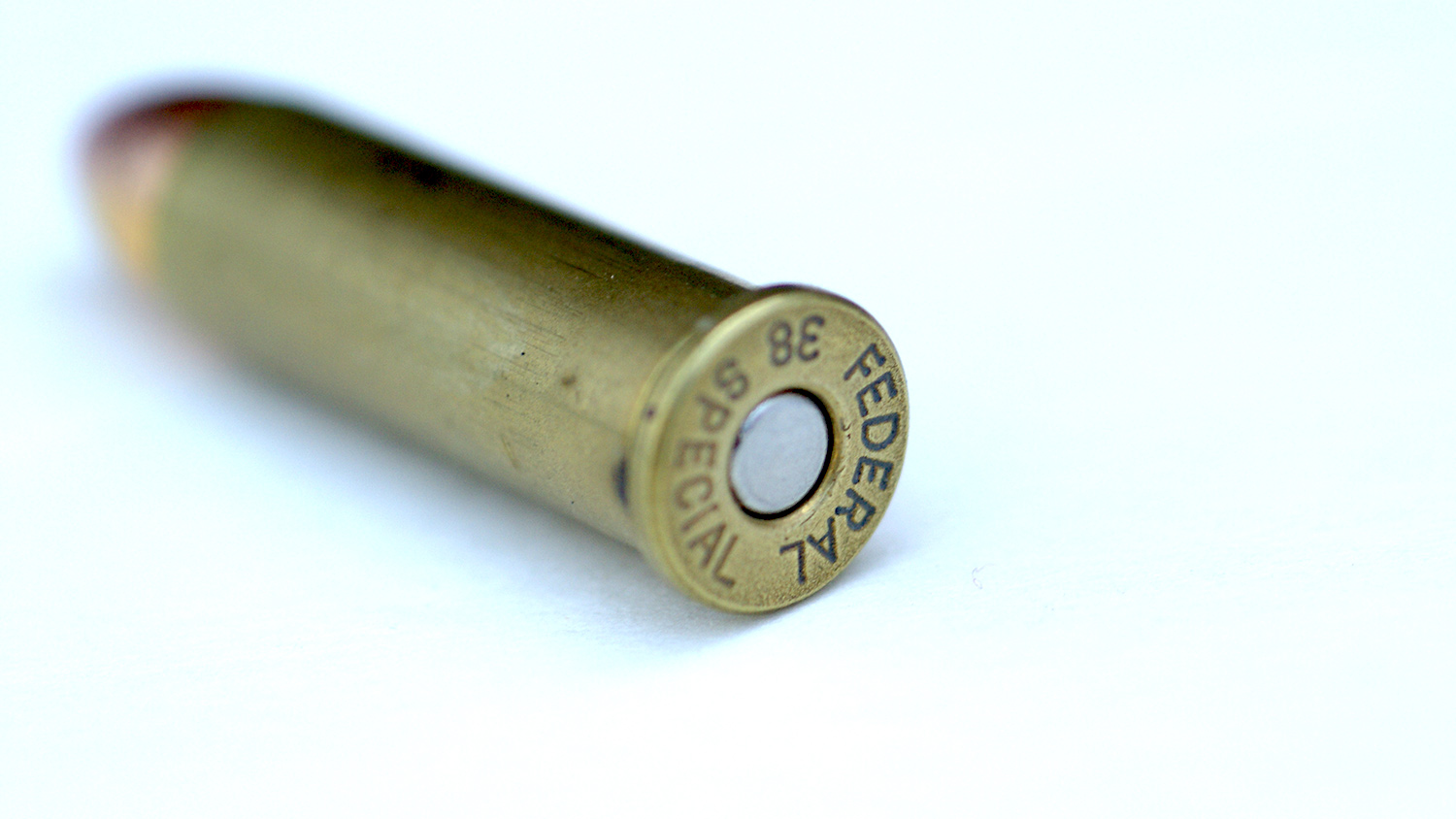 Reduced trigger pulls require the use of softer primers, and they must be seated below flush with the cartridge base. The author prefers Federal.

Another pitfall to trigger pulls much below seven or eight pounds is the trigger reset. The trigger rebound spring is reduced to get that light pull weight. A heavy trigger finger won’t let it come back to reset the trigger. It’s easy to short-stroke a light trigger. Shooters in this pull weight range have to practice their reset.

A buttery-smooth DA pull in the seven- to eight-pound range makes a revolver a joy to shoot. But, it comes with a price.

1. Learn to stage the trigger. Rapid double-action shooting is not the best choice if one has to make a tight shot around a No Shoot, or is trying to nail the X-ring on a 50-yard ICORE target. Upper-level shooters will often stage the trigger to put the revolver into the single-action mode, and gain the advantage of a light single-action pull—without shifting their grip to cock the hammer. 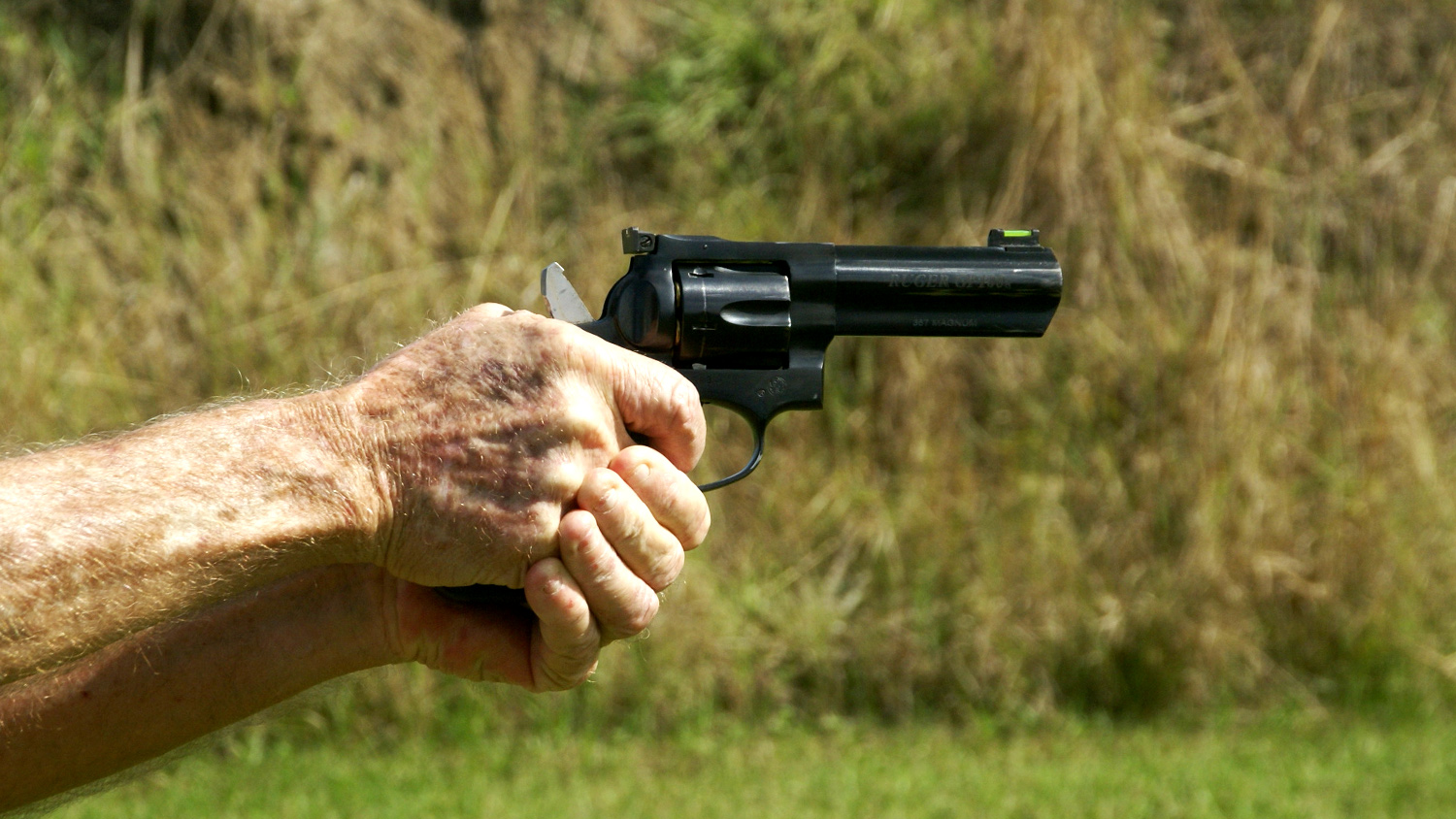 Staging the trigger allows a single-action pull without shifting the grip to cock a hammer. It makes tight shots faster and easier.

When the trigger begins rearward movement in DA, the bolt that locks into the cylinder notch drops out of place. This frees the hand and pawl to rotate the cylinder to bring the next chamber into alignment with the barrel. When that is done, the bolt snaps upward to again lock the cylinder in place. That can be distinctly felt (and even heard if decent active earmuffs are worn). At that point, the trigger is at the SA pull weight.

Learning this is best done at begun with an empty gun at home. The key is to feel the bolt locking back into place as the cylinder achieves lock up. This takes some practice. Put an aiming point on the wall and work at achieving the “lock up/trigger staged point.” Some shooters find that putting more finger through the trigger allows them to find a “staging point” where the trigger finger tip hits the offside of the trigger guard as the bolt locks up.

Moving to a live fire range, don’t worry about speed. A target at 20-plus yards is suggested. Have a firm grip, sight focus and work to get the proper trigger stage before the shot breaks. Accuracy is the goal here. Staging the trigger won't be needed often, but it pays big dividends when it is.

Very few out-of-the-box revolvers are ready for upper-level competition. These five tips will help get one there.

I Have This Old Gun: Colt Police Positive Target (Second Issue) | An Official Journal Of The NRA

I Carry: Colt Python Revolver in a Galco Holster | An Official Journal Of The NRA

END_OF_DOCUMENT_TOKEN_TO_BE_REPLACED

USPSA Area 5 Championship: Every Challenging Target You Can Think Of In One Match

Results of the 2022 USPSA Area 5 Championship held this past July in Brooklyn, Michigan