AR-15 Architecture: The Key To Function

AR-15 Architecture: The Key To Function

Reliable function for an AR-15 requires trustworthy action operation (extract, eject, reload). However, there’s a grey area between adequate and excessive. For example, “excessive function” in an AR-15 is when the cycling speed gets high much too quickly and the excessive gas pressure floods the operation system.

Symptoms of an over-gassed gun include quick bolt unlocking, where excessive bolt carrier velocity is going back and creating a sharp “bounce” when the bolt carrier gets fully rearward, leading to an excessively rapid return to battery.

Each of these symptoms can abuse parts and cartridge cases, and excessive carrier velocity can also cause extraction failures (the extractor loses its grip on the case rim, bends the rim or rips a chunk out of it) and feeding failures (return to battery is so sudden the follower can’t react fast enough to elevate the next round). Broken bolt stops also fit in this mix of ills. 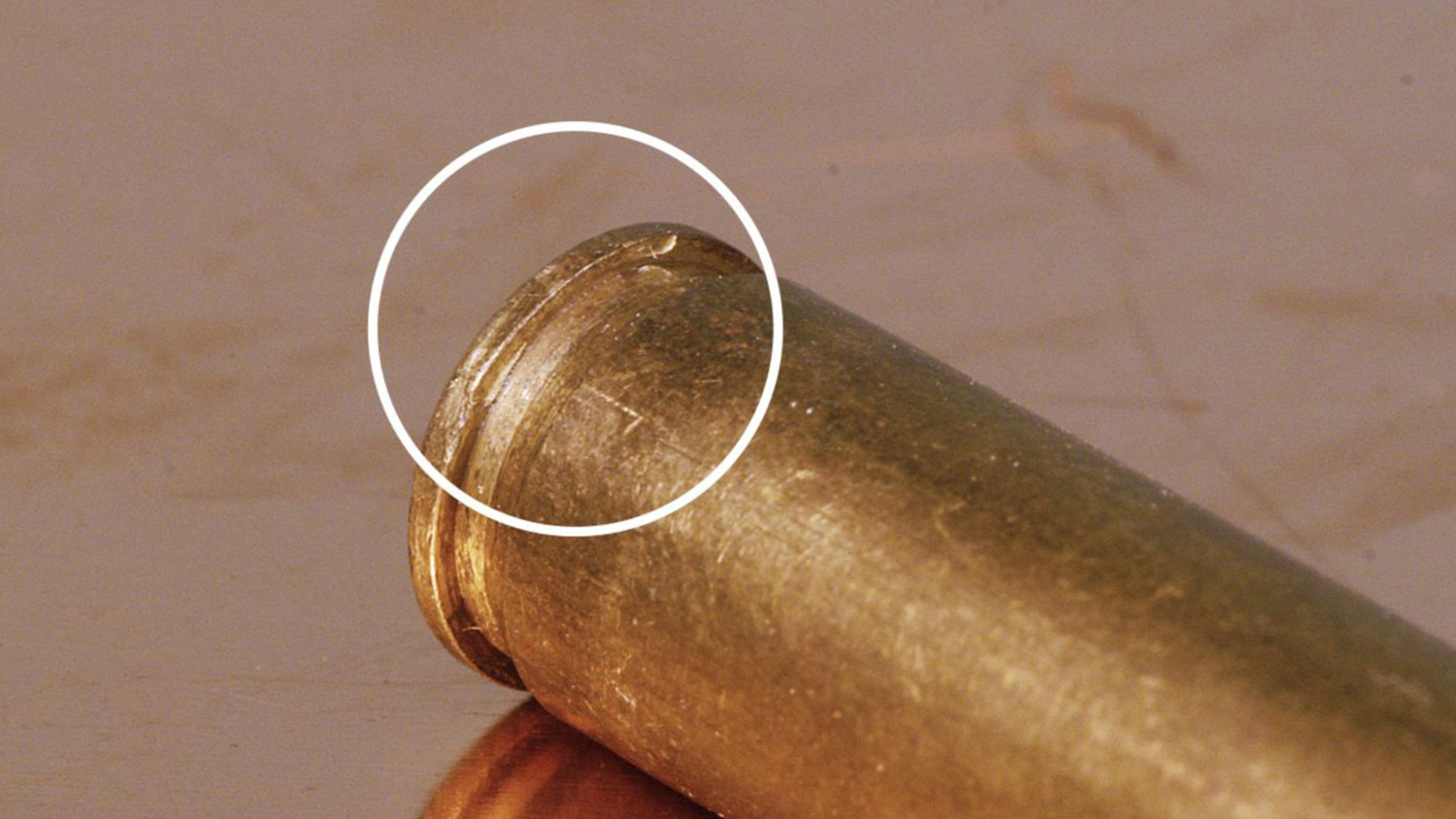 Excessive system pressure means premature bolt unlocking which creates a condition where the cartridge case is still swelled and gripping the chamber wall when the extractor tugs it toward freedom. Extractor damage is clearly evident on this case rim.

Before discussing Eugene Stoner’s gas system, keep in mind that we’re dealing way down in milliseconds—fractional milliseconds—in defining “faster,” “slower,” “not enough” and “too much.”

Armalite’s original blueprints specified a 20-inch barrel, 12-inch (measured from the upper-receiver face) gas-port location and a ballpark 12,500 PSI gas-port pressure level. Those are the “rifle” specifications, which work just fine. Therefore, the problem isn’t in the design. Rather, it’s in the redesign. The shorter the front end is, the more redesign has its influence. Carbine-length barrels and especially pistol-length barrels create a condition where using the same ammo there is higher gas pressure at the gas port.

Let’s back up and get a picture of the gas system in operation.

An AR-15 has a “direct impingement” system. Propellant gas is bled off through a gas port in the barrel, this gas goes through the gas manifold or “gas block,” through a gas tube, and into the carrier key atop the bolt carrier, and that’s the end of the line—the resultant force deposited into the key starts the bolt-carrier assembly in motion.

Think of this gas system as a pressure chamber with two valves—one at the gas port and the other at the muzzle, and the moving bullet opens each valve as it crosses each plane. Therefore, the spacing of the valves matters greatly. 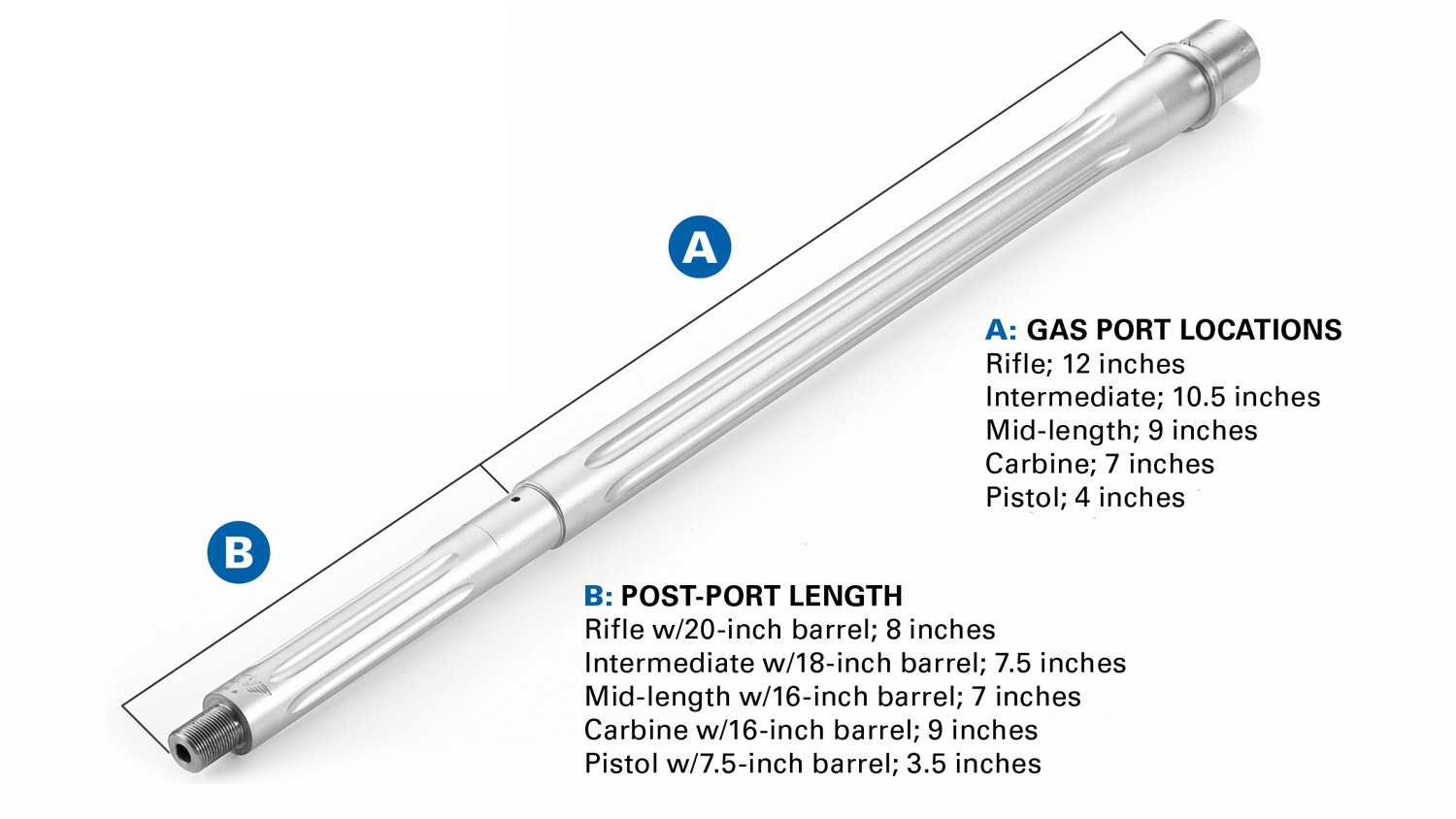 Moving the gas port forward allows time for expanding propellant gases to fill, lowering the pressure. Shortening post-gas-port length reduces the time the system is under full pressure. This 18-inch barrel with gas port is from Wilson Combat.

As the bullet enters the barrel bore and moves forward, the space (volume) behind the bullet is increasing, which lowers the pressure of the contained gas behind it. More available barrel-bore volume before the gas port translates to lower pressure at the port. So, post-gas-port barrel length influences how long the system is “sealed” under full pressure, and the shorter the length, the shorter time. Again, the bullet is serving as a plug that’s sealing all the pressure in the system—until it exits.

It’s clear why shorter guns succumb to the effects of excessive gas-system pressure. However, tools from the accessory market can help offset this.

Installing a heavier buffer and also a stouter buffer spring buys time. Both increase resistance to the bolt unlocking, thus delaying it from moving. The heavier buffer better resists movement and moves slower. The stouter spring increases in-battery load against the bolt carrier, increasing its resistance to initial movement, and the carrier also then moves slower coming back against the buffer.

“Just put an adjustable gas block on it” is also routine advice, and, yes, that helps, but ideally such devices should be used to tune function. If it’s needed just to make the gun run, then the chances are certain something else was missed, most likely in the architecture. That’s where we’ll find the cure. 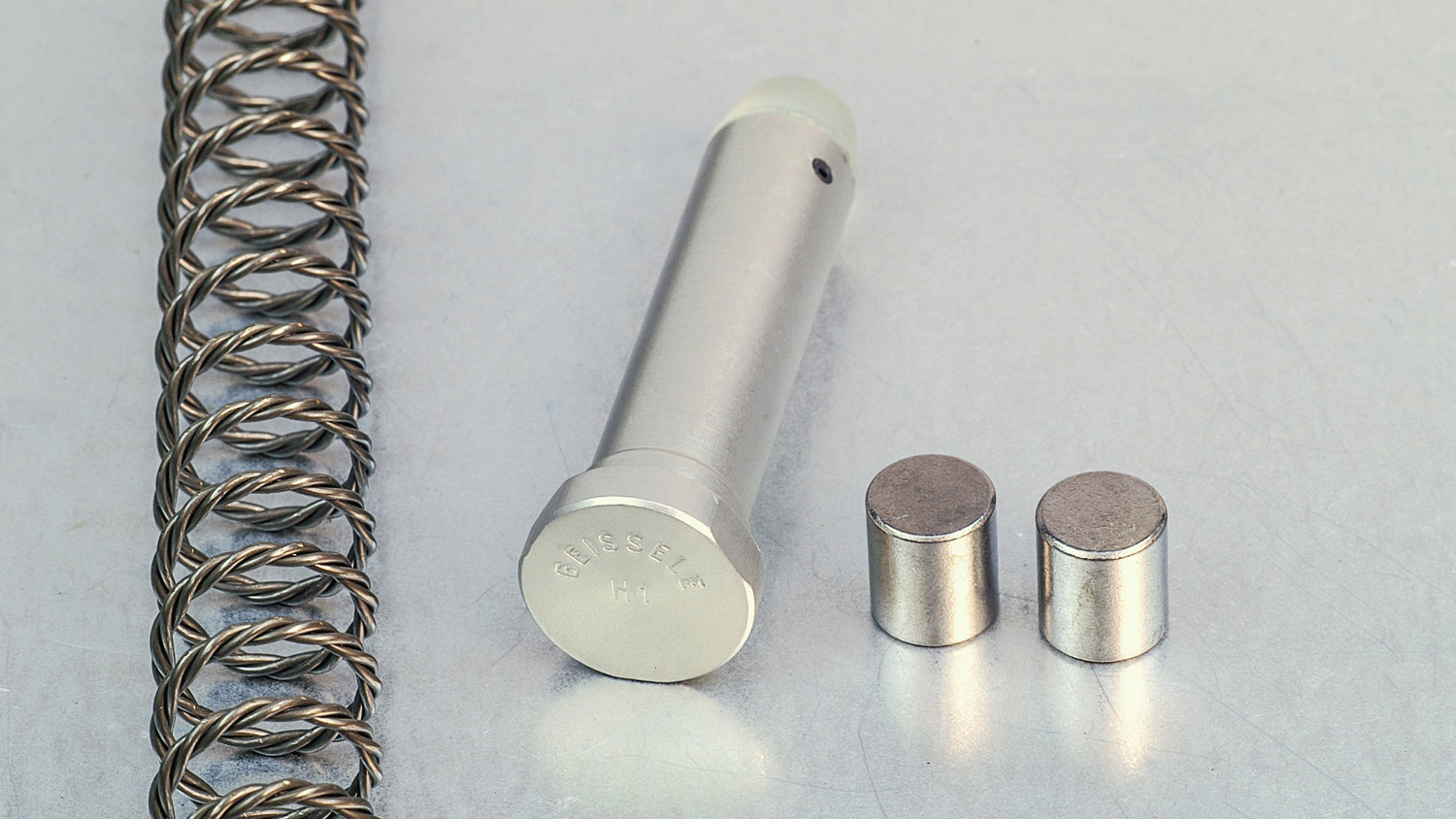 Increasing resistance to movement is preferable to altering gas flow with an adjustable gas block. A heavier buffer and stouter spring delay unlocking and improve matters greatly. This Geissele Super 42 system is recommended.

Without a doubt, the best way to correct function is through architecture, not accessories. “Architecture,” as I use the word here, is the structure and specifications of the gas port and barrel combination.

Given the same ammunition, reducing system pressure comes from moving the gas port farther forward, toward the muzzle, as does reducing the length of the barrel ahead of the gas port. Conversely, shortening the distance to the port, increasing barrel length beyond the gas port, increases pressure effects.

Gas-port size has a decided influence. However, I’ve seen different takes on how to choose an ideal port size, but nothing I’d call a standard exists, or not based on measured comparisons with similar-spec, mil and commercial barrels. Generally, high port pressure needs a smaller hole, while lower pressure demands a bigger one. Unless you’re going full custom with a barrel, port size is beyond the scope of our influence. 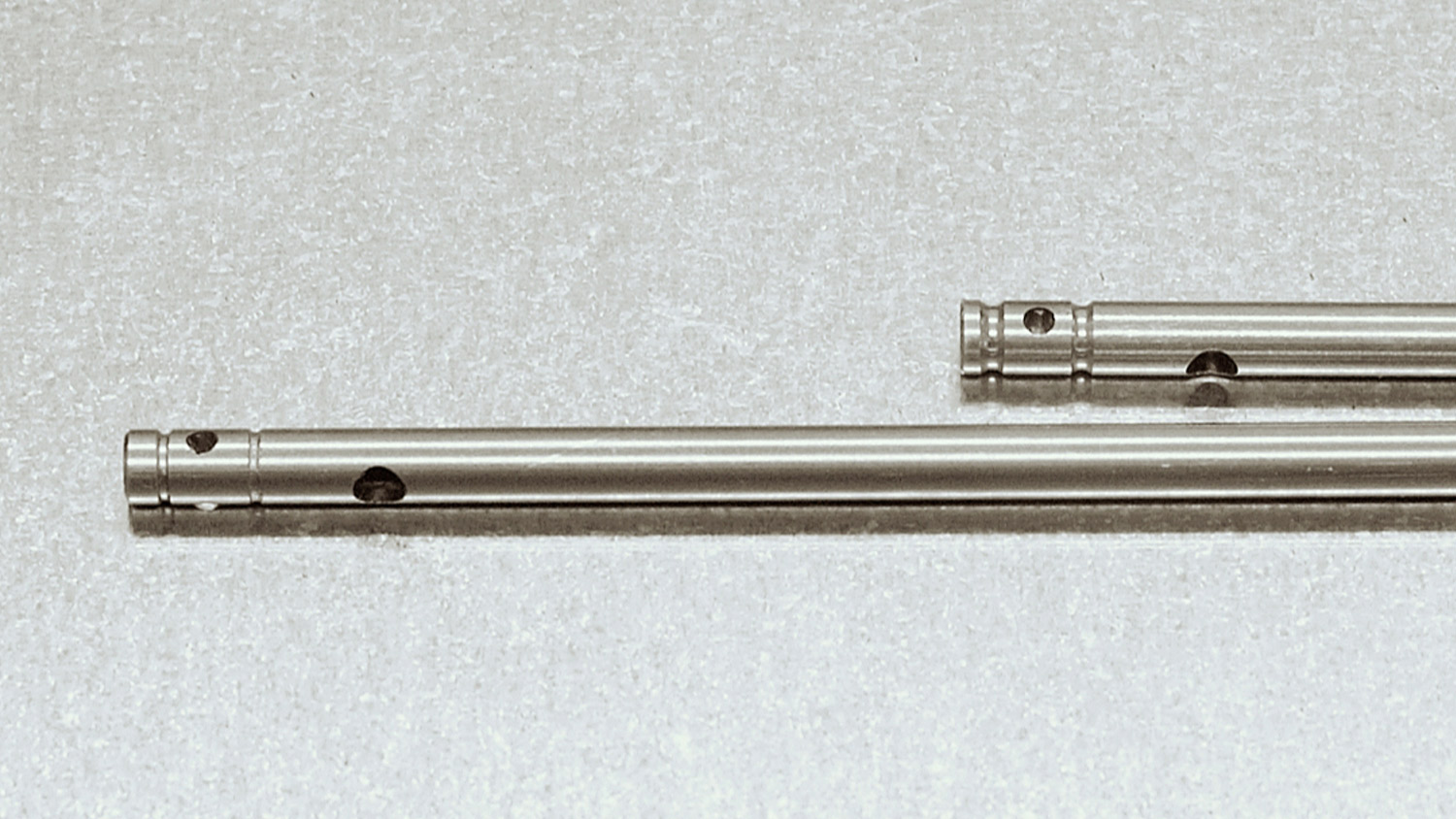 Plus-length custom gas tube from a 26-inch barreled NRA Match Rifle project from over a dozen years ago.

While valves and weights allay the symptoms of a gas-system architecture that’s producing too much force, the original solution is to configure the system closer to that ideal port pressure. The distribution of pressure developed for the original rifle is the solution that has the fewest trade-offs.

That’s easy enough with a carbine-length front, 16-inch barrel. A mid-length gas port is located 2 inches farther ahead of carbine-standard. It effectively also shortens the post-port distance by the same amount meaning lower pressure getting in and a shorter time the system is under maximum pressure. Both are good things.

If you’ve got a hankering for an AR-platform pistol, choosing a 10.5- or 11.5-inch barrel makes it possible to get a carbine-length gas system affixed, and that is a 3-inch additional length over the common 4-inch pistol-port, and a significant reduction in post-port length. That really tames a little gun.

Moving the gas port forward was a trick that NRA High Power Rifle shooters performed on long-barreled AR-platform match rifles for the past 20 years. The reason was to shorten the post-port barrel length and improve both function manners and spent cartridge case condition. This trick is important, especially if you want to run a little slower-burning propellant to maximize bullet speed. Everyone else finally caught on. 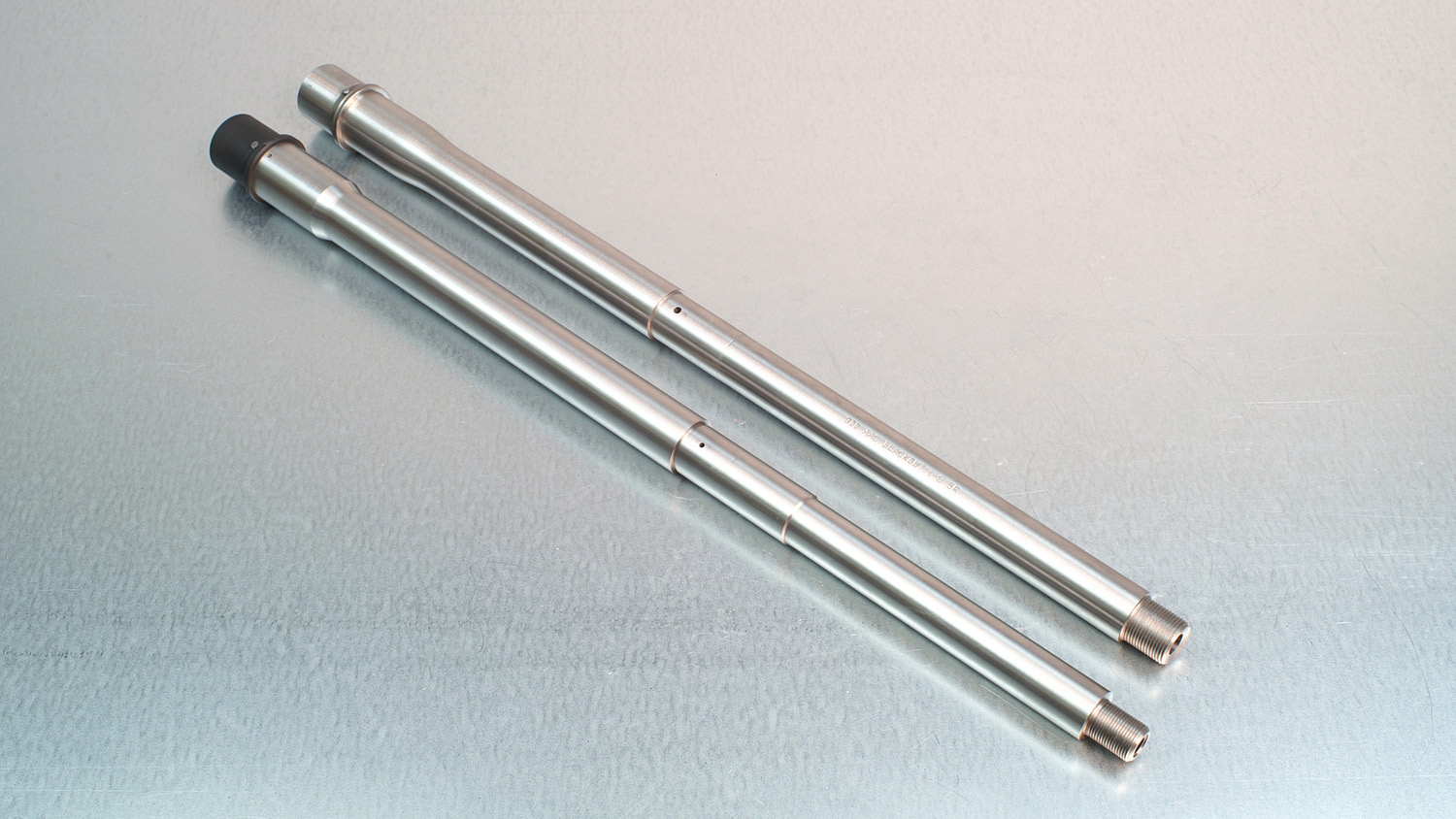 On the other hand, there can be a whole different side to a focus on architecture. It’s possible to remedy known-problematic platforms, like AR-15 carbines, well beyond “cured.” The latest USASOC contract M4, the URG-I (Upper Receiver Group-Improved) is the best example I’ve seen. I built up my best representation of an issued lower to sit under it, headed to the range and found out rather quickly that it wouldn’t run with anything but genuine 5.56 NATO. According to its engineers, the URG-I was built to handle “the full rigors of the M855A1” (AB57 ammunition). That stuff is hot. To get it there, here’s the specs: mid-length gas-port location, 14.5-inch barrel. That combination, along with the buffer/spring combo selected for that gun, meant it would not function with lower-pressure commercial-spec .223 Rem. loads. I had to seriously soften the buffer system to get it to work with my routine loads. This isn’t a complaint, rather just a caution, and a clear example of how effective changing the elemental architecture of Stoner’s gas system can be.

Port location determines when the gas gets in and its pressure upon entry—farther, lower; nearer, higher. This matters most above all the other “fixes.” 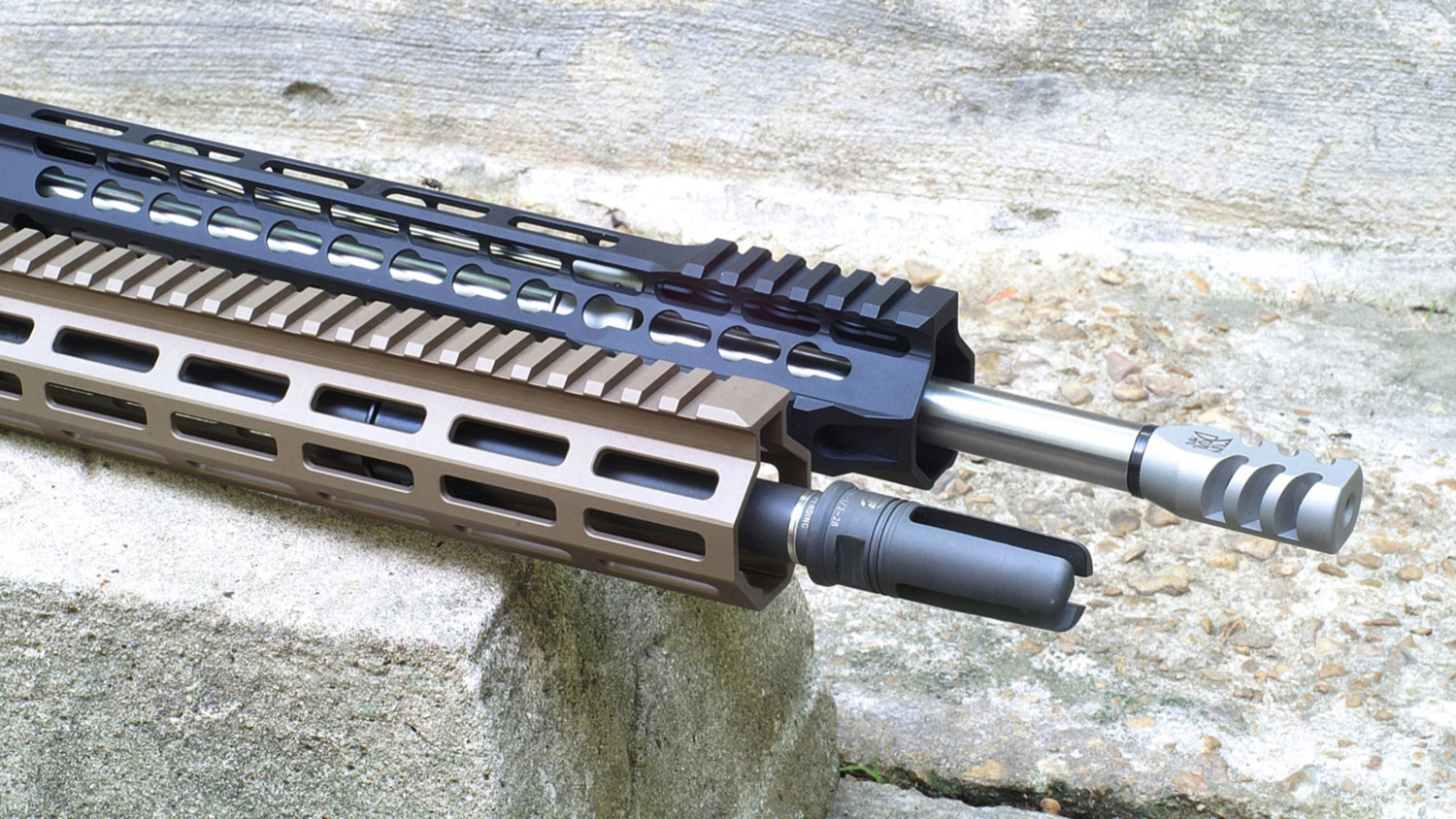 Post-port barrel length is: Longer, max pressure in the system over a longer time and shorter, max pressure in the system over a shorter time. Two notes: NFA requires 16-inch minimum barrel length for a stocked gun. To legally run a barrel with shorter than a 16-inch rifled section, the muzzle device has to be permanently attached, and the muzzle device then also has to net an overall 16-inch barrel length. But, that’s another topic entirely.

Ultimately, it’s really time that’s an issue. A little more time here and a little less time there. Ideal operation can be looked at as a matter of “timing.” Ideally, pressure has had time to subside prior to the bolt unlocking. It can’t all be gone, it can’t go to zero, or the gun wouldn’t work at all. Some amount of “over-function” is built into any semi-automatic. It’s always a matter of degrees, and better is better. 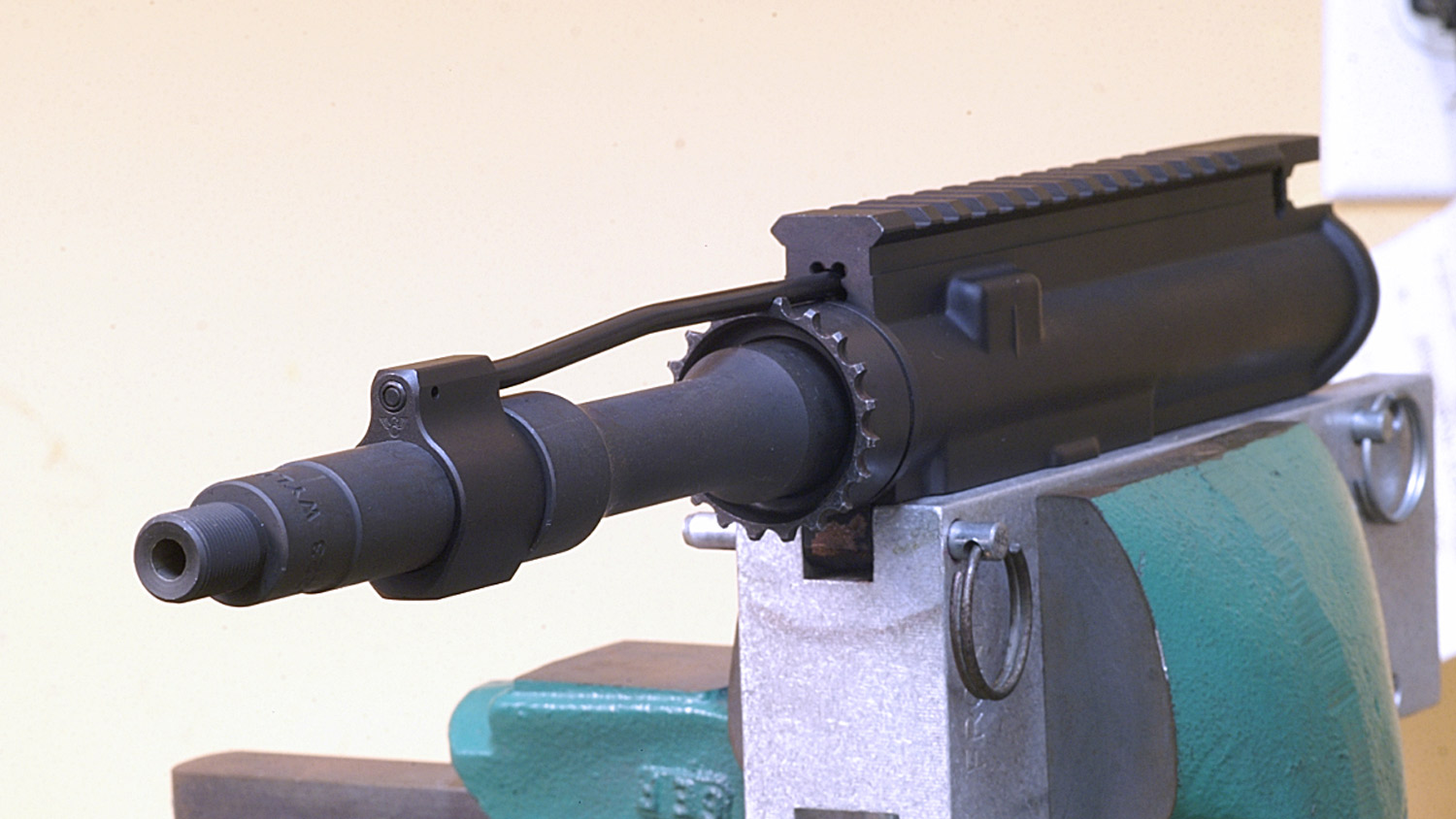 This is just crazy looking, but it’s what we’re dealing with on a pistol-length 7.5-inch barrel. Ramp up the buffer weight. This system will eat an adjustable gas block alive.

First Look: Anderson AM-15 Chambered in .350 Legend | An Official Journal Of The NRA

END_OF_DOCUMENT_TOKEN_TO_BE_REPLACED

There were 427 competitors that tackled 19 stages at the 2022 USPSA Carry Optics Nationals, held in September at the CMP Marksmanship Park in Talladega, Alabama

NRA Hunters' Leadership Forum | The Art of a Thanksgiving Hunt