WVU Back on Top in CRCA Poll

WVU Back on Top in CRCA Poll

The WVU rifle team climbs two spots back to No. 1 in this week’s College Rifle Coaches Association (CRCA) Poll.

The rankings are based on the last aggregate score shot by each team. 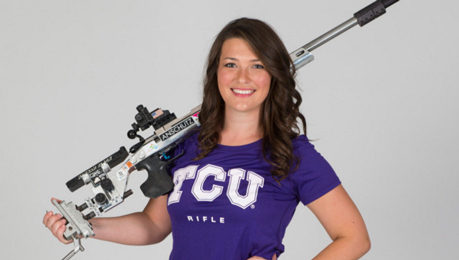 TCU remains at No. 2 for the second straight week. The TCU women’s rifle team most recently celebrated a 4695-4658 victory at No. 8 Ohio State. TCU shot a team score of 2326 in smallbore and 2369 in air rifle. TCU will close out the fall schedule this weekend when it travels to No. 9 Army on Sunday.

Murray State climbs one spot to No. 3. The Racers will return to action this weekend at the Gamecock Open hosted by No. 15 Jacksonville State in their last event of the 2015 portion of their schedule.

Alaska-Fairbanks moves one spot to No. 4, and Air Force sits at No. 5.

END_OF_DOCUMENT_TOKEN_TO_BE_REPLACED

Smith & Wesson has revealed a new Performance Center M&P pistol that’s designed for competition right out of the box, with a slide cut for optics, five-inch barrel and oversized mag release that's also reversible. All for less than $1,000.